The City Will Love You

Stories that peel the skin off cities to reveal the beautiful dramas within.

Forget You, I didn't

No, I really didn't. I just ended up being much busier than I intended to be (who ever intends to be busy?), so I've fallen behind on sending out information and updates. Still, we're at 15%!! Double digits. At the time of my first update we were in single digits. Thank you all very much; it's just the platform I need to really get this campaign going.

Still, since it's been so long you deserve to at least know why I kept you in the dark for so long.

Let us begin with a single note of music, speaking neither of tone nor tempo, for this is where it began. We can know nothing of the attitude of the dance, except for the pose of Emelina Santos in that moment, which in the light that reflects off the shifting face of the waters by the Malecón, spoke of liberty and entrapment. For when we speak of losing ourselves in music, in the same flight and flurry of muscle contractions that make us feel so liberated, are we not also chained to the enchantment of the song's sway, slaves to its syncopation? But let us not debate the nature of freedom for too long, as too many powers have a stake in its fencing. Rather, let's hold this moment, this image of a woman stilled like a music note that triggers a memory deep enough to get lost in – like a country. And this image, in silhouette, sits in the irises of a man the texture of night, becomes his pupils.

Believe it or not, that took me two weeks to write so please love it!

That's the fullest update I can manage in the 20 minutes I have, but I am aware of the questions that have come about my experience with the BIG publisher that didn't take on THE CITY WILL LOVE YOU. A picture is worth a few words at least - especially when the picture is an e-mail - so here's an image of the e-mail my long-suffering agent got. 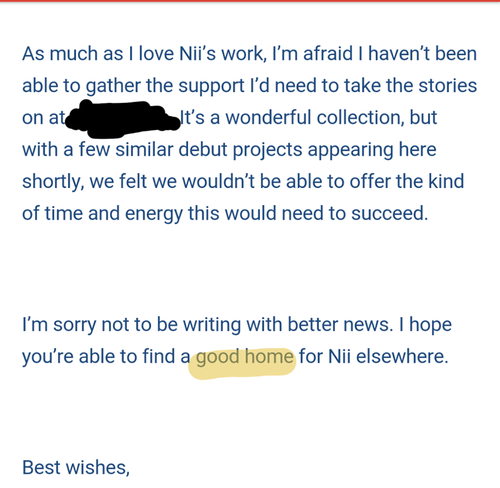 I mean, I like a good rejection that tells me my work isn't right and pushes me to go and get better, but this...! This literature industry can break you if you're not strong... as Ceelo Green pitches it; “the way you play your game ain't fair. /I pity the fool that falls in love with you”... Still, that's why publishers like Unbound are on the up; they help rescue work that's been thrown overboard for reasons hard to fathom and - with time - you'll find writers going to them first. I've decided that Unbound is my "good home". Every writer wants to be judged just on the quality of their work, not by some game of numbers and market trends.

Again, THANK YOU ALL! We'll get there soon.

A first edition of the hardback plus the ebook and your name in the back of the book.
Choose this reward
£10
54 pledges

Ebook and your name in the back of the book.
Choose this reward