The Cartography of Others 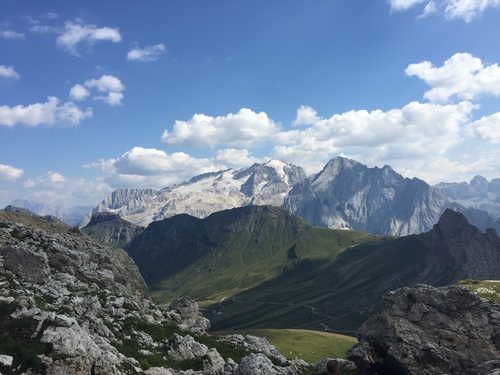 Firstly, thank you to pledgers large and small, this book could not happen without you! To those I have not been able to thank personally, please accept my gratitude! The Cartography of Others is at 75% now, with 125 supporters on board. I have been overwhelmed by the warmth and interest you have expressed, and sincerely hope you enjoy the stories. Thank you for sharing, paying up, reading my author page! For those who have not signed up there is a three-day summer hike in the Dolomites as one of the rewards, should you be tempted. Now here is some waffle about mountains.

In the beginning I hated the mountains. I was driven up there by a man who loved the hard alpine air and swiftly changing skies. I found the massive peaks threatening, too vivid, belonging to a frightening metaphysical dimension. The way that all sound dropped vertically or the stillness seemed to vibrate, volumes of chill air cascading towards crinkled rivers and hamlets. It made me think of sanatoriums and tuberculosis, the shoddiness of being, the chute towards illness and death.

In short, I hated it.

(Plus, as an Antipodean girlfriend, I was also being tested for my resilience to vertigo and the cold. It was a test I passed, but how I used to dream of the warmth of the homebound car as we tramped along!)

Scoot along to many years later. Over a decade in both East and West Africa, where I learnt that the dry cold of harmattan is when airborne illnesses will thrive, that malaria is treated best with a Chinese drug called artesunate, that typhoid makes the inside of your intestines peel away, that there is an illness called tomato skin (impetigo) which leaves huge red water-filled blisters on a child’s trunk, and I was baptised in another fashion. Who ever thought I would fall for the mountains in those heated, coastal years?

But it happened. A return to Italy clarified my Australian need for being outdoors. Winters were so cruel here, fog dissolved our house into the landscape, spring took an age to provide warmth. I began to wind up to the nearby Dolomites in a car full of fighting kids drowned out by Jimi Hendrix (I was later thanked for this). I learnt telemark skiing (free the heel, free the mind) and was smitten. Still am.

Two of the stories in The Cartography of Others take place in the Dolomites. In both of these pieces I tried to bring out the vast impetuosity of the alpine setting, where the simplest of elements prevail – weather, gravity, geology – and where the history of a landscape is underfoot, pulsing.

They say that falling is the easiest of deaths, that the body reinstalls its preternatural love of flight; that impact is delivery.  (from ‘The Kingdom of Fassa’)

1st edition paperback, ebook edition, and your name in the list of Super Patrons in the front of the book.