As always, people can pledge for a copy from as little as £10.

Please do let me know if you’d like some promotional postcards and I’d be delighted to send you a little pile.

In my story, the main Brazilian character, Vilson, suffers at the hands of both favela gangsters and corrupt cops. But there is a cop who wants to do the right thing and there are people in the favela willing to help him.

Right now in Brazil, following the pacification programme in the favelas for the Rio Olympics and the World Cup, violence is on the rise again.

With the Brazilian economy in crisis and Rio state’s finances collapsing, a police officer is killed on average every 54 hours in Rio state, and the number of people killed by police in shootouts has risen by 45% this year. Brazil accounts for 10% of the homicides in the world.

Police officers are often mistrusted as corrupt, but they are also underfunded, chronically so during a financial crisis. And corruption is obviously not exclusive to the police: former Rio Mayor Eduardo Paes is under investigation for allegedly taking millions of dollars in bribes for Olympic Games contracts. A third of the President Temer’s cabinet is under investigation for corruption.

The divide between rich and poor continues to trouble Brazil and an underfunded police force cannot narrow that divide. The police are struggling even to combat the violence, so there are now troops on the streets of Rio. That won’t solve anything in the long term. 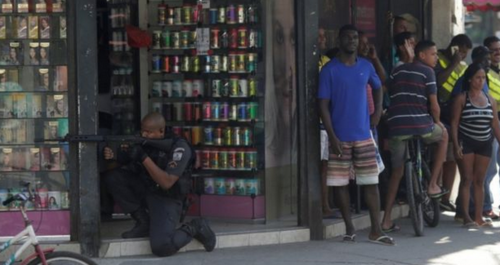