A place to think about

I trust the summer is turning out well for you, even if the UK weather has not been so fabulous lately.

Funding for The Burning Hill is now up to 77%. Not too far to go... Please do let me know if you would like some of the postcards I’ve had printed for distribution among book clubs etc. and I’d be delighted to pop some in the postbox to you. Every flicker of interest and every pledge is gratefully received.

We drove through France in early August to visit my Dad and Stepmum and, along the way, stopped at a place called Oradour-sur-Glane, a village near Limoges. In the afternoon of 10th June 1944, soldiers of the Waffen-SS arrived in the village and massacred 642 men, women and children. The men were shot, the women and children herded into the church, which was then set alight. The SS then torched the village. Only a handful of inhabitants escaped. It has been left exactly as it was in the aftermath of the massacre as a memorial. Cars, iron bed-frames and old sewing machines sit rusting in the same position they were in that afternoon more than seventy years ago.

A silent, empty village in a beautiful part of France, Oradour-sur-Glane is there to remember ordinary people. The bronze church bell remains on the floor near the entrance, where it dropped from the bell tower and cracked, and then partially melted in the heat of the fire. Monuments to remote military figures don’t feel very important in a place like that. 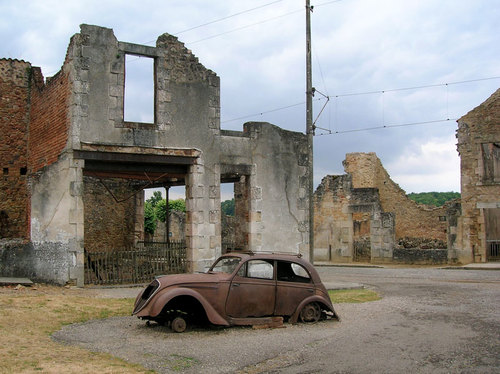