Yesterday I heard the sad news that Helen & Peter Stransky had both died, within a fortnight of each other - one in Jerusalem and the other in Canada. How strange these things are! They had come to London on Kindertransport and had both been scarred for life by their experiences. Here is the beginnng of Chapter 2 A suprise visitor which describes how I first met Helen and discovered that my father was Jewish.

That same summer of 1997 I received a telephone call at my home in Belsize Park, North London. The caller, a woman, sounded American. ‘Is that Vicky? I am Helen Stransky, your father’s cousin. I am in London for a Kindertransport reunion and would like to come and see you.’ I had no idea my father had any cousins, but knew that Stransky was his mother’s maiden name, so I invited her over. I didn’t even know what Kindertransport was.

A few days later Helen arrived. She was a small woman in her mid-fifties and wore a red beret jauntily on her head. As we sat down to a family tea – I was forty by this time and married with two children, my son and daughter just home from school – she explained how she and her brother Peter, aged four and two respectively, had left Prague on one of the special trains organised by Sir Nicholas Winton, a British humanitarian who organised transport for Jewish children in 1939 to escape the Nazis. He rescued 669 children from Prague, including Helen and Peter. Her parents, Otto Stransky (my grandmother’s brother) and Luisa (née Weinmann) could not get out and, she told me, probably both died in the death camps, along with Pauline, my father’s grandmother, for Helen never heard from them again. 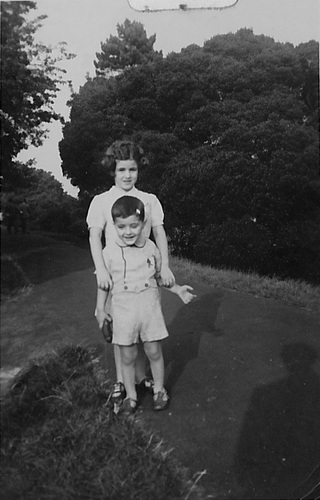 Helen and Peter shortly after thier arival in London

She and her brother, Peter, had eventually gone to Canada with her other grandmother and her Uncle Richard, her mother’s brother, which was where she grew up. Uncle Richard was, according to Helen, an unpleasant man who put them into care. Her first foster home was loving, but Richard moved them to new families, where the man of the house abused Helen. She now lived in Jerusalem, working as a radiographer, and was desperate to attend the Kindertransport reunion as she, like so many children from that generation, felt she owed Sir Nicholas her life.

I went to Jerusalem in 2016 to meet up with Helen and to see if she had any memories she could share. Here is a photo of us both at the King David hotel (you can read about that visit in my blog https://vickygoestravelling.com/2016/12/04/jerusalem-searching-the-central-zionist-archives-for-clues/

What she really wanted was to find out what had happened to her parents. Using some old documents she gave me and  with the help of my archivist friend in Prague, I managed to give her the answers she had always sought. At last she had found closure after more than 70 years of silence. 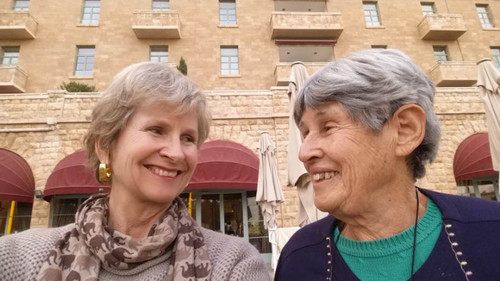