Tom has fled Prague, summoning his mother and younger brother. They arrived on 29 March 1939, 14 days after the Nazis invaded Prague.

Chapter 5 The metamorphosis of Tomas Ungar


Grete’s Certificate of Registration, issued on 29 June 1939, allowed her to stay in Britain for three months on condition that she did not ‘establish himself [sic] or seek any employment’. She rapidly agreed with Tomy that they should emigrate to Canada, where Rudi [her first husband] and John [son from that marriage] were also planning to go as soon as it could be arranged. Meanwhile, she rented a cheap flat on Fairfax Road near Swiss Cottage in northwest London, close to where I now live, from a couple whom Grete recalled had ‘dirty feet’ and ‘didn’t wash their clothes enough’.

During these last summer months of peace, there were other Jewish refugees from Czechoslovakia passing through Swiss Cottage and neighbouring districts, almost all in the same precarious situation as Grete, Tom and Sascha [younger brother]. Tom remembered how they would get together in each other’s dingy lodgings and seek solace in their music, just as in Prague. At these impromptu Hausmusikabends, Grete would play the piano (if one was available) and sing German operetta and lieder, while other new-found friends performed chamber music on the violins and other instruments they had managed to bring with them as they fled the Nazis.

Everyone was acutely aware of all the family and friends they had left behind. Grete’s elderly mother and brother were still in Prague, now hard-up and in fear for their future. Somehow, Grete was at this stage in communication with them. She had also kept up with Hermann’s [husband] friend Gustav Krojanker, who had emigrated to Palestine and she was delighted to resume her friendship with Ella [Krojanker’s ex-wife], who was now in London.

Grete had a specific reason for making urgent contact with Krojanker as she prepared to depart for Canada. She hoped Krojanker might still have some leverage over Hermann’s brother Felix regarding his failure to repay her dowry, which Hermann had ‘lent’ him:

‘…My noble brother-in-law, Felix, has unfortunately defrauded his nephews Tom and Sascha, whom he loves so much, of a quarter of a million Czech Koruna, a sum which would come in very handy nowadays,’ Grete wrote sarcastically to Krojanker on 13 July. She continued:

I showed Ella the respective letter by Felix, which was addressed to Hermann, and in which he confirmed that the money, my dowry, was lent to him by Hermann for his various [business] branches in Berlin, I believe there were nine. In the beginning he did pay the interest, but then he declared that these were joint business ventures with Hermann.
I am telling you all of this for the simple reason that I have heard that I have been roundly condemned over there, because I broke it off with the Ungar family. I was just too well-mannered to go to court at the right time and get the money for my children. But this money will not turn out to be a blessing for the Ungars. Please forgive me for bothering you with this sordid tale, but I don't want, in addition to the serious loss which my children had to suffer, to appear in a bad light.
Unknown to Grete, Felix had just been granted a travel certificate to leave Czechoslovakia for Palestine; his sister Gerta, settled in Tel Aviv, had even transferred £1000 to pay for Felix’s departure. Fatefully, Felix delayed, unwilling to leave his elderly, frail mother Jeanette. With the outbreak of war, Felix’s travel certificates were rescinded. Felix, his wife, his mother and his two sons were rounded up in 1942 and sent to Terezin.

In the same letter to Krojanker, Grete also revealed that she had married Hermann’s farmer cousin Richard Kohn by proxy, ‘for purely practical reasons’. By implication, Grete was not in love with Kohn; the two of them must have felt they had a better chance of being permitted to settle in Canada as a married couple. ‘I am now waiting for my husband to come here in order to quickly leave for Canada,’ she told Krojanker. ‘But from what I hear from home it won't be easy to get out.’ 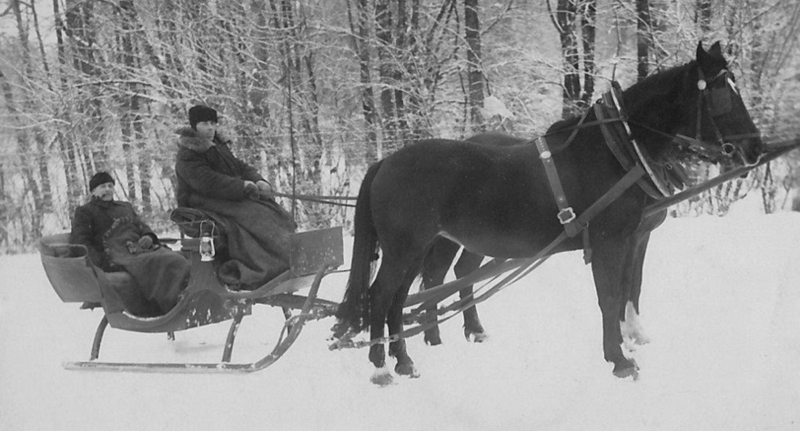 
Grete waited in vain for Kohn who, like Felix, had missed the narrow window of opportunity to leave Czechoslovakia. Meanwhile, Rudi and John had already departed for Toronto. Grete, Tom and Sascha were stranded in London with Grete’s three-month permit due to expire at the end of September.

In August, Grete decided it was time to flee again, perhaps fearing correctly that war was about to break out. According to my father, the family stuck a pin in a map and alighted at random on the quiet cathedral and market town of Wells in Somerset. They lived first as paying guests at a farm just outside Wells, then stayed as lodgers at a vicarage and finally moved to small house on Chamberlain Street near the town centre which Grete rented in October 1940.

Grete found a job as a cook on the night shift at the Scophony factory outside Wells, which produced radar components for the RAF. By now rather plump, she teetered around the country lanes every day on her bike, a former ‘lady-who-lunched’ in Prague off to serve goulash and other Austro-Hungarian recipes in a British works canteen. 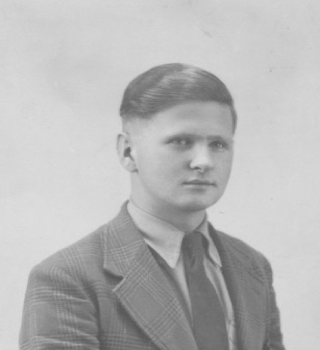 Tom, shortly after he arrived in Wells

As soon as he arrived in Wells, my father Anglicised his name to Tom and signed up for an agricultural course at a local institute. Meanwhile, Grete somehow got 12-year-old Sascha, now called Alec, a scholarship to Bembridge public boys’ school, which was evacuated from the Isle of Wight at the start of the war to Coniston. This was too far away, so eventually she managed to get him a place at Millfield, close to their new home in Wells. 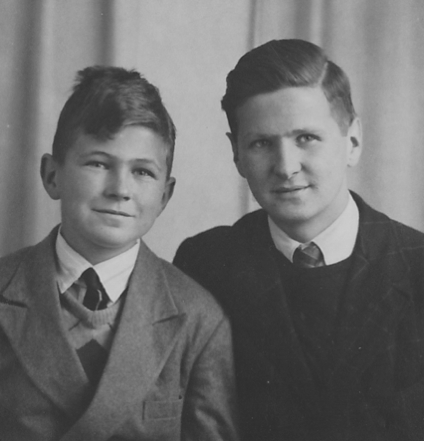 Tom and Alec in Wells

Tom received a first-class diploma at the end of his short agricultural course and then found a job at Scophony testing electrical parts for the radars. Eager to do his bit for the war, he also joined the Home Guard, for at 17 he was still too young to join up. Tom wore his new-found ‘British’ fighting spirit proudly on his khaki sleeve; ‘cowardly’ was how he described two young friends in Wells – one a local lad, the other a Russian émigré workmate at Scophony – who agreed to join the Home Guard with him and then opted for the Fire Service.

I later came across photographs of Tom, larking around in his Home Guard uniform with his fake gun at the ready: at the start of the war there were not enough weapons to distribute to the volunteers. 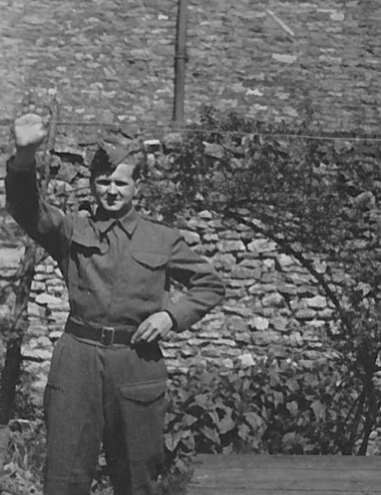 What was real was Tom’s love of the Home Guard. In his fond memory, it epitomized the coming together of ‘normal patriotic citizens - people from all walks of life, from the squire and the bank manager, to the butcher and grocer - to deal with the enemy, who they were expecting to drop from the sky, or land from the sea, in the only way they could. They put aside their bowlers and put on tin hats’.

In Wells, the Home Guard manned underground concrete shelters, with slits for shooting at the enemy. At night they patrolled the streets and watched the skies for sign of enemy action; then they went to sleep on gym mats in the town hall or school, not bothering about changes of clothes, and woke each other up with cups of tea when it was time to swap watch. Small wonder that Dad’s Army later became one of Tom’s favourite television programmes.

And then he met Joyce.