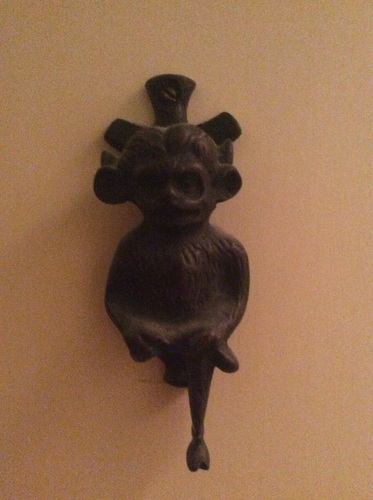 The work on the manuscript of The Book of Wag continues apace. Both Gillian Stern and I love it more the more we delve into  it. I don't have a publication date yet, but when I do, I'll be sure to let you know.

In the meantime, some of the old mates may enjoy reading some nostalgic snippets from a diary Paul started writing last summer.

This is the story of a room.

Outside the door to my study is a brass door knocker of the Lincoln Imp. It is rather hideous, like a gargoyle, with a fixed and toothy, mirthless grin. One leg is crossed over the other. He also seems to have two pairs of ears. Big ones on the side, which stick out flat, and, slightly behind, two more, which protrude upwards.  Early bionic man.

Hanging from the knocker is a visitor pass to the House of Lords, dated 9/10, which was the day I first had lunch with Baroness Rendell of Babergh.  Ruth and I have been friends for many years. She is the most important anchor in my publishing life.

When we first met in the early 80s at the offices of Hutchinson at an old Georgian  house in Fitzroy Square, we had lunch together at a rather less grand restaurant called Averoffs.  It was known to some of us as ‘Buggeroffs’, perhaps because we had so many farewell do’s there.

The food was perfectly acceptable. Ruth and I sat outside. She started with a pink gin before we got on to the Cypriot red, which was always referred to as ‘Mr-de-Roy’s wine. Afames is I think its real name. And David was our most congenial of sales  directors – I see his broad smile as I write.

Of course, Ruth and I talked about her new book, but also about life. Curiously, we also talked about the Victorian way of death.  The idea of family and friends sitting round the bedside together to say a fond farewell to a loved one. She liked the idea. So do I. And, in a way, that is what is happening to me now.