The following lines were inscribed in my Uncle Wag’s dense, angular scrawl at the back of the third of his cloth-­‐bound memoirs.

‘I lost the sunshine and the roses
I lost the heavenly leaves of blue
I lost the beautiful rainbow
I lost the morning dew
I lost the Angel you gave me, summer the whole winter through
I lost the gladness that turned into sadness
When I lost you’

I guess he must have composed the poem himself. Underneath is some indecipherable squiggle, and the doodle of a knight’s helmet with the visor down above a shield decorated with two fleurs de lys and a diagonal stripe with three blobs. 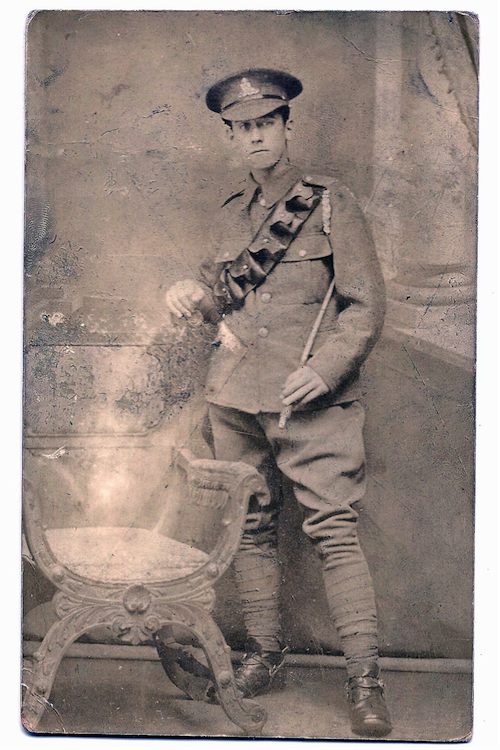 Shall I tell you about the underwear or the ghost? I think, perhaps, I will start with Ethel’s silk and satin underwear. After Uncle Wag’s death from cancer of the pancreas, my mother Ivy was left the house and its contents, as well as a small fortune, some of it in neatly bound £50 notes in a shoebox under the stairs.

When we were clearing Wag’s sister’s bedroom – he had kept everything as it was since her death, also from cancer, twenty years earlier – my mother discovered pristine pants and bras, folded immaculately, exuding a slightly camphorated perfume, in the top drawer of Ethel’s ornate Regency dressing table. Her monogrammed silver-­‐backed hairbrushes, without a single grey hair entangled, stood side by side, next to some antique, silver-­‐topped perfume bottles and sprays.

The gilded, three-­‐part mirror was slightly foxed round the edges. My mother sat down in front of it and stared at a couple of sepia photographs – Wag is dapper in uniform, legs astride, peaked hat, puttees, a swagger stick under his left arm and a leather strip containing a series of pouches which stretches from left shoulder underneath his right arm. It is not a bullet-­‐stuffed bandallero. Ethel is wearing a cloche hat, fox fur round her shoulders, hands concealed in a muff. Both snaps have been cut out very carefully and pasted on a piece of yellowing paper. They remain in a double-­‐sided, battered black leather wallet. Wag must have carried it round with him through the Somme, until the gas got him.

Looking at my mother’s reflection and at the pictures of her half-­‐sister and half-­‐ brother, there was only the slightest suspicion of a physical resemblance between the three of them.

Ivy Matilda, my mother, was the runt of the litter, the last and, perhaps, most beloved daughter of Harriet Burton. Her first husband sired eleven children before he gave up the ghost. My mother’s father had not bothered to get married to Harriet. That was a secret kept until comparatively recently. The grandfathers in my family, on both sides, were just men in moustaches in old photographs.

I only remembered my mother’s mother propped up in bed, in a dark room with dark green velvet curtains. Ornate earrings dragged down her lobes. The air was always musty. On the few occasions I visited her, she always pressed a silver half crown into my hand and told me I had been a good boy. And I was more than aware that I hadn’t been, that I wasn’t a good boy. In that, I had a lot in common with her oldest son…

I have kept a few of her things. Some kitsch Meissen candelabras, a clock and a fruit bowl. My wife doesn’t like them. But they are staying.

I also have a tapestry, that used to cover a crack in the Old Rectory where grandmother breathed her last. It depicts a turbaned warrior spearing a lion, with decorative palm trees and a distant mosque. Isobel and I have no quarrel about that. It hides a crack on the living room wall.

The cancer came quickly. Uncle Wag had seemed to be in robust health. He continued to do occasional speciality work as an engraver with James Purdey & Sons right up to the age of 90. Then, suddenly, he was ill. Having never mentioned the war, he spoke of little else in those last days before he was taken to hospital, where he died the morning after I drove him in.

‘I was cheeky to an officer,’ he told me. ‘This group of them came riding over to our position. We had been under heavy bombardment for a week. The enemy was in a good position on a ridge above us. “I wouldn’t go up there, if I was you, Sir,” I said to a young captain with gleaming boots. “There’s a war on, you know.”’

Wag shifted in his chair. ‘They tied me to one of the wheels of the gun we were pulling. For two days.’

I keep the photo of my uncle and aunt in my study alongside a few other keepsakes – including a standard issue to soldiers of a 50-­‐yard reel of khaki linen thread, made by W & S Knox of Kilbirnie, Scotland. Doesn’t look as though No.22170 W G Burton of B Battery ever used it. I also have in my possession his Soldier’s Small Book. The battered and blotched binding has come loose, and a critical page has been torn out, the page which ends with ‘Effects of Wounds’.

It does confirm, though, that he enlisted on 19/4/15, that he lived in Brixton, South London. That he was an Engraver by trade or calling, height 5’ 5”, eyes brown, hair brown, complexion ‘Fresh’…

Inside there is advice on everything from the Correct Method of Challenging to Saluting of Officers, Field Cooking and How to Prevent Sore Feet. I can’t imagine why he kept it.

In the house in Worcester Park he shared with his sister for seventeen years after the Second World War, he had a grandfather clock, which I admired when I was a boy. He always said he would leave it to me and he did. It is a fine piece of work, made by Edward East, clockmaker to Charles 1. Wag had found it in pieces in an auction house in Cheam, and reassembled it himself. Only the brass hinges on the walnut door which concealed the pendulum were not original. Wag made them and inscribed a message there.

The clock kept perfect time until recently. Isobel, my wife, is not a woman who complains about things, but she found the loud tick intrusive. For me, the noise was reassuring. I wanted Wag to know that his presence was felt.

Something clogged in the winding mechanism. I had the fault fixed for an exorbitant 900 smackers. All was well for a while. Then one day the clock stopped again, and that is how I have left it.