The Book Of Bera Part One: Sea Paths

Darkness of a Winter Afternoon 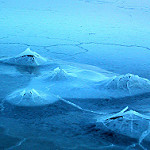 The longhouse slumbered in the darkness of a winter afternoon. She listened for voices but there was only the crackle of the fire. They had all gone, apart from her skern. Shadows thickened the cobwebbed corners but she knew he was there, waiting for her to die, so that they could go on their last journey together, soon.

There was no reply. She needed to talk to her and there was so little time. She felt herself slipping away so she struggled to sit up straighter against the rough wooden post. The tearing sensation in her stomach made her cheeks prickle with faintness. Then the quality of light changed. Rats scuttled away. A cold draught swept in on the early dark.

‘Shut the door, dearest, and come here to your mama.’

There was the clack of the latch and the blackness was complete once more. Her nose prickled with the smoke that hazed the spaces and she gasped for air. She slid off the post and felt a coldness at her back.

‘Bera. Don’t be afraid. Come over here so I may see you.’

The child made no move.

The dying woman reached out her arms. ‘There’s nothing to be frightened of.’

She heard the rustle of shuffling footsteps over the clean firs Sigrid had put down after the birth. The sharp smell rallied her a little. A small pale oval hovered in the gloom.

‘There is so little time, Bera. Come closer to your mama. Look – I have something for you.’

The oval slowly became the dear face of her small child, looking serious, too young. She sighed.

The child took a step nearer. Her mother grasped at her and clutched the child’s cold hands. She felt her flinch away.

‘Take off my necklace.’

She bent her head so that the child might reach the clasp. It was some time before she felt icy fingers fumble at her neck. The child's smock brushed her face. ‘You smell of the sea,’ she whispered.

The child unhooked the clasp but tugged at her hair. She felt a clump of it pulled from her tender scalp and, despite herself, she cried out.

The bead necklace slithered down her neck and fell onto the floor with a clatter. She gasped, her throat exposed to danger. It had not been off her neck since her own mother had died. Her skern came out of his corner and she felt a warmth at her throat.

At last she heard the scratch of the beads being gathered. ‘Do you have it?’

‘Keep the beads safe, Bera. You are so small and there was so much I had to tell you. But just remember this: you are a Valla and you …’

The pain returned, taking her breath and her will. This baby had gone full term and she would meet death gladly if only he could live. But Ottar would not raise him, Sigrid said. She said the baby could not suckle and so Ottar put him out there, in the snow, for the wolves to take him.

She could not feel her legs and tried to shift them with both hands. 'Help me, Bera.'

‘What are you doing, Mama?’

‘Your brother’s outside. I must go to him. Help me up.’

She was too heavy and her small daughter fell with her onto the furs.

‘I’m not well enough to get up today. Perhaps tomorrow.'

‘I will always be watching over you, dearest one.’

The child’s breath was short and fast but it did not sound as if she was crying. It was a start. She felt deep concern for her daughter’s future but the gnawing need to slip away was taking over. Her skern came close, sweeping its presence round her like a cloak. It was all too late.

The girl put a small cold hand against her cheek and the touch freed her. Her breath left her like the tide, leaving only the beads hanging between them like a cord.

Only my supporters have seen this before and encouraged me to keep it in. Thank you. A few changes, for the sharp-eyed! The lovely photo is frozen sea, taken by Andre Mouraux on flickr. Please continue to share with friends and we'll get there.