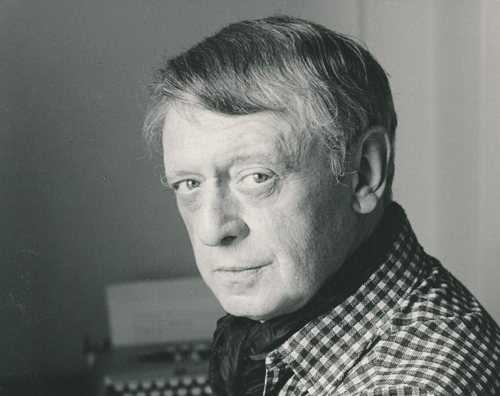 Following on from my post about Burgess as a historical novelist, I want to say something about the decisions I made in actually writing The Black Prince.

Burgess planned a novel about the life of Edward of Woodstock (1330-1376), known as ‘the Black Prince’, Duke of Cornwall, Prince of Wales from 1343, Prince of Aquitaine from 1362, eldest son of King Edward III and Philippa of Hainault, father of Richard II. He's a fascinating and well-known figure, and indeed it’s surprising there haven’t been more historical novels about his life, really.

At any rate: the question facing me was: how would Burgess have characterised this figure?

Answering this question, to my own satisfaction, involved me in two distinct stages. The first thing I did, of course, was to work through the Burgess material to hand:—what he said about the project, his notes, and the completed screenplay he produced sometime in the mid-1970s, a copy of which was provided for me by the Burgess Estate.

I broke this latter down into its nine main ‘acts’ or groups of scenes. That, then, was going to be the larger structure of my novel.

Burgess was clear that he wanted to juxtapose the colour and splendour of the chivalric legend with a sense of the actual violence and feculence of the period. As far as the former goes, the screenplay includes all the most romantic and famous scenes associated with Edward’s life, including several that were regarded even in the 1970s as apocryphal—for instance, the legend of the founding of the Knights of the Garter, his pure love for Joan the Fair Maid of Kent, his black armour and long yellow hair. Burgess's Edward is a man who believes the rigmarole of chivalry sincerely, even as his military campaigns bring disaster, mass death, violence and rape to France. Nor does the screenplay stint on these latter qualities: it includes a good deal of mire, cynicism, baseness and savagery (in his Paris Review interview Burgess insisted the novel would be ‘evoked in terms of smell and visceral feelings, and it will carry an undertone of general disgust rather than hey-nonny nostalgia’). Completing the novel was going to involve somehow balancing these two elements. No easy task.

Stylistically my task was to create a Burgessian prose, or more precisely a Burgess-doing-Dos-Passos prose. Formally, though, the job was more complex. The screenplay works chronologically, starting with Crecy and ends with Edward’s death, and I didn’t feel I could alter that. But Burgess was never a straightforward writer, and he was fond of playing formal game and encoding structural patterns in his novel. Napoleon Symphony (1974) is structured meticulously to replicate the musical forms of Beethoven’s 3rd symphony; The Right to an Answer (1960) is a five-act tragedy modelled on Shakespeare—on Othello and Hamlet—and the thirteen chapters of The Pianoplayer (1986) correspond to the thirteen keys covering the octave on a piano (eight white and five black). Earthly Powers (1980), after Napoleon Symphony Burgess’s most formally complex book, is built out of patterns of nine. As he explained in his autobiography, the narrator of the novel, a globally successful novelist modelled loosely on Somerset Maugham, looks back on his life. ‘He celebrates his eighty-first birthday in the first chapter,’ Burgess says. ‘Let then the total of chapters be eighty-one’:

81 is 3 x 3 x 3 x 3. I spelt this out at the beginning. ‘I looked at the gilt Maltese clock on the wall of the stairwell. It said nearly three ... We were three steps from the bottom ... I minced the three treads down the hall ... Three steps away ... lay a fresh batch of felicitations brought by Cable and Wireless motor cyclists.’ [Burgess, You’ve Had Your Time p. 356]

As I mapped out how I was going to write The Black Prince, I decided a similar trinitarian pattern of threes could be extracted from the 9-part screenplay (3x3, after all). Edward of Woodstock was particularly devoted to the Trinity: his tomb at Canterbury Cathedral has his effigy laid out beneath an image of the Trinity, and in the words of historian Martyn Lawrence ‘contemporary chroniclers paid ample witness to the Prince’s devotion to the cult [of the Trinity] which was growing in popularity during the fourteenth-century’.

The Prince’s trinitarian fascination with the Father, the Son and the Holy Spirit, would, clearly, have to be a part of the novel. For a man so in the shadow of a powerful, divinely anointed father himself, the Trinity positions Edward in an intriguing way. And 3s are easy to work with in a formal or patterning sense.

I worked at this, doing my best to ensure that any patterning did not overwhelm the organic flow of the story and characters—something of which Burgess himself was never guilty.

Nonetheless, I began to worry that I was being too programmatic about the exercise: too fixated on patterning the well-known material at the expense of the more organic and human elements in novel writing.

It gave me pause, and sent me back to Burgess. I found myself asking: what were Burgess’s recurring fascinations as a novelist? He’s often thought of as a virtuoso stylist of course, as somebody working with a studied post-Joycean linguistic richness. I certainly wouldn't want to downplay that aspect of his art. The Burgess ‘style’ was always about finding beauty in expressiveness, never about mere showing-off— ‘to some of us,’ he famously said, ‘the wresting of beauty out of language is the only thing in the world that matters.’

That, of course, was going to be something I at least tried to reproduce in The Black Prince. But too single-minded attention on Burgess’s stylistic fireworks misses something crucial about his writing, I think. He was a deeply humane novelist, fascinated by the action of character in the world. I’ve seen this aspect of his art discussed as a kind of one-note theological interest in matters of free will, but it is surely much more than that.

Clockwork Orange (1962), famously, tells the story of a young man, Alex, who exercises that free will to do some very bad things, and explores what happens when he is imprisoned and deprived of his ability to act badly via Ludovico technique aversion therapy. The novel’s ethical thesis, if we want to boil it down, is that this 'cure' is a much worse violation than anything Alex did. Alex’s crimes were horrible but human; the State’s crime in depriving him of his free will was much worse, a sin against the Holy Spirit (this was how Burgess’s phrased it) because it destroys Alex’s very humanity. ‘I don't know how much free will man really possesses,' Burgess later said; ‘but I do know that what little he seems to have is too precious to encroach on, however good the intentions of the encroacher may be.’

The fame of Clockwork Orange means that this, fundamentally Catholic, theological perspective has been often aired. But there’s another aspect to Burgess’s interest with character that is less widely discussed, perhaps because it is more rarely noticed. Because Burgess was fascinated by innocence. In a way, Alex is an innocent: living an unconsidered life, moved by no great theory of evil—or virtue—indulging his nasty appetites much as a child does, because in this novel he is little older than a child. In Burgess, innocence is never twee or conventional, nor is it William Blake-like in its purity. throughout his art Burgess has a properly conflicted attitude to innocence as something simultaneously beautiful and terrifying.

Burgess’s innocents are rarely actual children (he almost never wrote children into his fiction, and only rarely wrote adolescents). His innocents are adults whose pureness of engagement with the world gifts them a kind of fundamentalist capacity to do great good and great evil almost interchangeably. Don Carlo Campanati, the Catholic churchman who becomes Pope in Earthly Powers, is one example: a man perfectly lacking in doubt. His unshakeable faith and his many good works make him an almost exemplary priest, but he is also able to stand by and do nothing whilst other people suffer. In one memorable scene Campanati allows Nazis to torture a young girl in front of him rather than tell them where a certain resistance group is to be found. He claims not to know, but actually he does. Doubt has never debauched Campanati’s certitude, for good and ill.

Another example is to be found in Burgess’s under-appreciated novel One Hand Clapping, published as by ‘Joseph Kell’ in 1961, and in many ways a companion piece to Clockwork Orange. The narrator of this novel, Janet, is a young working-class woman, working in a supermarker and living with her car-mechanic husband. She is a sweet-tempered, thoughtful and pleasantly ingenuous young woman, and the early stages of the novel reproduce the rhythms of her ordinary life compellingly. But things don’t stay ordinary. Without going into all the details, her story involves sudden fortune, travel, an affair with a poet and Janet’s husband insisting the two of them form a suicide pact. Rather than die Janet bashes him on the head with a poker, hides the body in a big trunk, and runs away with the poet (and the trunk) to the Continent.

It is a mark of how cleverly the novel is made that this final ruthlessness in Janet does not strike a jarring or forced note. It follows, we believe, directly from the way her character has previously been developed. We might say the novel understands murder as (to appropriate Johnson's phrase) something equally in the power of him that is hardened by villainy and inspirited by innocence. In Burgess’s universe, innocence is always simultaneously beautiful and terrifying. Which is quite a profound thing, when you come to think of it. Janet’s violence is, in the context it which it happens, entirely of a piece with who she is: common-sensical, doing the needful thing in the moment, on a par with putting baked-beans on toast or calling 999 when her sister takes an overdose. She is, in her way, as terrifying a creation as Alex. Perhaps, more so, since she doesn't embody Alex's more obvious delinquency.

Indeed, I'd say that one of Burgess’s claims to greatness as a writer was as an explorer of the workings of innocence in the world.

This, it struck me, was the key to writing The Black Prince. I am convinced that, had Burgess completed the novel as he planned to, he would have written Edward as an innocent, in this particular, Burgessian sense: a man capable of the ingenuousness of a pure commitment to love, honour and chivalry at the same time as he was capable of the violence of the battlefield and the savagery of the many massacres of French civilians. And once I had that, all the other elements in the novel fell into place.