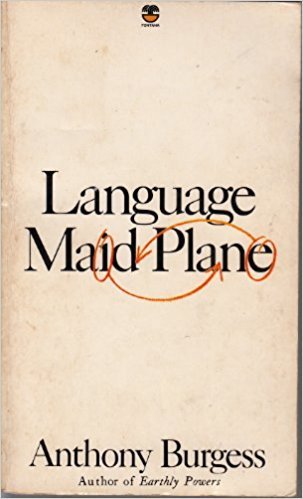 Whatever else he was (and he was many things, from novelist, critic and teacher to poet and musician) Burgess was a man in love with language. In the second Enderby novel, The Clockwork Testament, or Enderby's End (1974) he adapts a saying of Mallarmé. Enderby is teaching creative writing to angry New York students, one of whom reads out a bad poem to the class. When Enderby tells him that the poem is bad, the student disagrees: it is a deeply felt poem, he insists, and 'poetry is made out of feelings'. '"Oh no," Enderby said. "Oh very much no. Oh very very very much no and no again. Poetry is made out of words."' There's a profound truth there that any writer needs to absorb.

What Burgess is saying is that anybody who wants to write needs properly to understand their instrument, the way words work. For Burgess this was a lifelong study, and he published several books on the topic. For example here's, Language Made Plain, first appeared in 1964. A revised edition, pictured above, appeared in 1975. In the preface to this second edition he notes that he has corrected 'all the errors I could find', including those 'derived from my own carelessness and stupidity, and I do not doubt that there are still traces of these not totally liquidable human qualities', which is nicely put. He also says he has taken out what were, in 1964, topical references to 'Khrushchev, John F Kennedy, Lyndon Johnson' and the like, since they have become dated, 'though Khrushchev is too phonemically interesting a name to discard'. I'll come back to that.

The book works through ten chapters on phonology and general linguistics, and then through nine more of 'Languages in Particular'. I note here a couple of moments that leapt up and tugged at my metaphorical lapels. For example, here is Burgess on the importance of buying good dictionaries. Should we be thinking of obtaining a foreign language dictionary, he says, it should ‘give pronunciation in the symbols of the IPA’.

It is a waste of money to buy some match-box sized amateurish lexicon which gives ‘approximate’ pronunciations of ordinary English orthography—like kaffay for café or bam-bee-noh for bambino. The French-English dictionary I possess cost rather more than a bottle of gin, but it is worth spending money on a professional performance. [67]

‘Costs rather more than a bottle of gin’ will from this moment on become my go-to phrase for indicating expense as an index of quality.

The ancient Hebrews found the consonants earthy and the vowels heavenly, and they never allowed the latter to come down to earth and be represented alphabetically. [35]

Is that really why Ancient Hebrew has no vowels? I have my doubts. The same is true of written Greek, after all; indeed, it was a common feature of Middle Eastern ur-alphabets. A pretty story, mind. Here he is on ‘foreign importations’ into English:

The Blitz of Blitzkrieg lost its native meaning of ‘lightning’ and now carries connotations of wanton destruction and massive bravery. ‘Beatnik’—a hybrid of American-Jewish origin—meant a member of a group devoted to pacifism and self-denial, but it quickly became as contemptuous a term as ‘teddy-boy’ (itself an example of pejorative change). Conversely ‘spiv’—which had a brief currency just after the war with a cluster of bad meanings—was taken over by the French as an adjective: trés spiv, as applied to a garment, meant ‘stylish’, a good example of ameliorative change. The Malay word pĕrang, meaning ‘war’, passed into RAF usage with the particularised meaning of an attack, usually a ‘wizard’ one. [108-09]

I don’t think this last example is right, actually: a prang is surely a crash or collision, not an attack.

As with many books of this sort, there is huge incidental pleasure in the inadvertent (or perhaps more designed) poetry of the examples presented for purely technical display, as in this nice piece of social paranoia coined by Burgess to illustrate the nine different dipthongs in English:

FEAR THE POOR OUTSIDE THE DOOR. BEWARE OF POWER; AVOID DESIRE. [31]

Good advice. And I liked this wonderfully banal short-story, formed by Burgess making the point that in English 'the colourless word "get" can, in combination with various helper-words, do a remarkable number of jobs':

I got to bed late but got up quite early, got my clothes on, got some breakfast, got on the bus and got to the office on time. I got my ledgers out and got down to work, got a cup of coffee at eleven and got out to lunch at twelve-thirty. (I always get a good cheap lunch in the ABC) I got back to the office at two and got away at five-thirty, got home safely, got my tea, then got out to the pub as quickly as possible: some friends and I were having a get-together. [191]

It's like the wonderful middle-eight of the Beatles' 'Day in the Life'. Burgess would not have thanked me for that comparison.

And Khrushchev? Burgess uses the name to point up Russian letters we don't have in English: 'you practice,' he instructs us, 'on "smashed china" for the shch-sound (щ in the Russian alphabet)' in the middle of his name [35]. And then later to show the 'suitability of Russian for the language it clothes', since 'Romanisation only makes Russian look clumsy.' He offers the comparison:

So there we go.

Fascinating article, as always. Can't wait for the outcome of this Burgess/Adams collaboration - I honestly can't think of a better modern writer to don the mantle. Actually, I can't think of another. Just a point, though - isn't Clockwork Testament the third Enderby novel, not the second? (Unless you consider the first two books as a single novel published in two parts.)

The OED agrees with you on the main meaning of 'prang' & deprecates the Malay origin story, although the word does seem to have had a secondary meaning of 'bombing raid' for a while.

I can only see eight diphthongs (ear or ou ai air our oi ire). 'Poor' and 'door' are full rhymes, surely.