We don't think of Anthony Burgess primarily as a historical novelist. He wrote so many different types of novel he was more-or-less a whole literary movement on his own: literary fiction, postcolonial writing, science fiction, non-fiction, verse novels, spy adventure (his Tremor of Intent (1966), as richly strange as any experimental novel, also works extremely well as a readable James Bond pastiche thriller) and short stories. His output as a writer of historical fiction, though perfectly respectable by the standards of a more ordinary author, perhaps gets lost among such fecundity.

Then again, it was as a historical novelist that I returned to Burgess. I wanted to complete his never-finished historical novel The Black Prince in a manner that stayed as true as possible to his spirit; and so I re-read his entire output, paying particular attention to the way he wrote history.

It was a revelation.

To put it in context: it wasn’t until his fifteenth published title that Burgess produced his first historical novel, with the racy bio-fic Nothing Like the Sun: A Story of Shakespeare's Love Life (1964). Another busily productive decade would pass before his second historical novel, the extraordinary Napoleon Symphony (1974). Amazing novel! Arguably his masterpiece, surpassing the better-known A Clockwork Orange and even, perhaps, Earthly Powers. 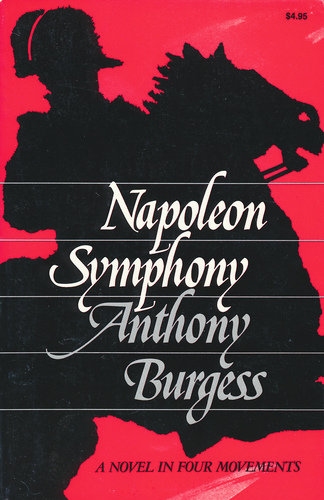 It is a sophisticated novelistic account of Napoleon’s career—from a young officer in the French Revolutionary Army, through his glory days, to his invasion of Russia and on to his exile on Saint Helena—that also closely follows the overall shape and the local specifics of Beethoven’s 3rd Symphony, known as the ‘Eroica’ which was (of course) itself inspired by Napoleon. Given how fundamental the differences are between verbal and musical artforms, the novel’s ambition is almost incredible (in the strict sense)—to combine the pure aesthetic pattern of great music with the narrative, character and verbal expressiveness of the novel. The fact that Burgess comes within a gnat’s quaver of pulling it off makes Napoleon Symphony one of the most exciting historical novels I have ever read. There’s nothing else like it in literature.

Burgess himself claimed he had ‘elephantine fun’ writing Napoleon Symphony, which I’m guessing is his way of saying he found it a stimulating challenge that was also crushingly difficult. If so, the strain of composition doesn’t show in the finished product, which is always alive with a shifting, restless, inventive energy, perfectly fitting the character of its protagonist. I re-read it, straight through, twice; and began trying to think through how I could reproduce some of its textual strategies.

Putting out this novel seems to have unlocked the historical-novelist side of Burgess’s nature. In fairly short order Burgess then wrote a trio of Biblical novels: Moses (a novel in verse, published in 1976), a fictional life of Jesus called Man of Nazareth (1979) and its sequel, based on the Acts of the Apostles The Kingdom of the Wicked (1985). He also wrote ABBA ABBA (1977), a brief but beautifully crafted novella about the last days of Keats in Rome in 1821.  And it was in the mid-1970s that Burgess conceived and did the initial work on his idea to write The Black Prince, a novel retelling the life and times of Edward Prince of Wales, victor of Crécy and Poitiers, in the style of experimental Modernist author John Dos Passos.

In the 1980s Burgess’s writing took a different direction again. I suppose we could call Earthly Powers (1980) a ‘historical’ novel in one sense, since it traces the life of its octogenarian narrator from the early 1900s up to what was then the present day. There’s certainly a lot of history ‘in’ Earthly Powers, from the First World War, the Great Depression, the Nazi death camps and postwar of American culture and society. But although Burgess effortlessly covers all this ground, the period is more-or-less cognate with his own lifespan, and indeed touches on his own life at many points. And, to be fair, it was the turn to autobiography that really engaged him as a writer towards the end of his career. The Pianoplayers (1986) reworks as fiction Burgess’s father’s life as a pub- and cinema-pianist. Any Old Iron (1989) likewise takes its characters from the first world war to the modern era, covering the period of Burgess’s own life. Then there was the two-part memoir, Little Wilson and Big God (1986) and You've Had Your Time (1990), a marvellous twofer that brings all of Burgess’s skills as a novelist to bear on the task of evoking not just own life but the historical period through which he had lived. But this, it seems to me, is a different thing than writing about a historical era from long before Burgess himself lived—as he did with the last novel he published in his lifetime, the beautiful and underrated A Dead Man in Deptford (1993) richly Elizabethan both in its period detail and in its prose.

So that’s, what: seven novels, out of thirty-three? Hardly Walter Scott or Dorothy Dunnett territory. Or to pick a more recent figure as a comparitor: seven of Hilary Mantel twelve novels are historical novels, 60% of her output, and all her most celebrated works. Still: although Burgess came relatively late to the form his historical fiction is both distinctive and important.

To write historical fiction well, an author needs to be able to bring together two skill-sets that aren't always found together in the same writer. On the one hand, he or she must be able to do all the things that make a ‘regular’ or set-in-the-present-day novel work: narrative, characterisation, style and form. On the other, s/he must be able to do what the best Science Fiction and Fantasy writers do—worldbuilding, as it is sometimes called: the creation, without strain or infodumping, of a world radically different to the one in which we happen to live.

Bad historical novels tend to be full of historical cliché, as a sort of shorthand way of indicating that otherness. Worse, they tend put basically modern characters in period costume and stick a sword, or a fan, in their hands: always a betrayal of the radical difference of history as such. Whatever else your chosen historical period was to the people who lived in it, it was certainly more than just fancy dress. Burgess did neither thing. The same skill that created the powerfully estranged worlds of A Clockwork Orange and The Wanting Seed enabled him to mark out the worlds of his historical novels vividly and deftly, and always in a maner that respected the past's contrariety. The same insight into character, and extraordinary command of style and form, enabled him to put together novels that work brilliantly on their own terms as novels.

Above all, his historical writing—and, of course, this is the case with all his writing—is marked by his extraordinary energy. It’s to do with Burgess’s blistering linguistic and stylistic facility, but also with how seriously he took the business of research, of character. His first-century Roman Empire, or his Elizabethan England, or his Napoleonic Europe, never feel like the product of mere booklearning, are never musty or passé. They don’t, really, read like history. The books come alive with a very present electricity and energy. They read as now, although a now thrillingly different to our actual now.

Which brings me to The Black Prince. Completing this novel was certainly a challenge, technically, although I’m sure it was nothing compared to the complexity of a project like Napoleon Symphony. My task was something like balancing three spinning plates at once: the subject matter of the novel, Burgess and Dos Passos. I needed as complete a grasp of the historical period as I could manage—to know about Edward’s life, and more broadly fourteenth-century culture, mores, society, religious beliefs and military practice. I had to forget many of my modern assumptions, to think myself out of today’s bourgeois, guilt-based culture into an older, feudal, shame-based one; to respect the past as past rather than trying to morph into some superficial version of the present. And again, I needed to be able to reproduce Burgess’s distinct style, his writerly voice and his restless inventiveness of form and narrative—but not just to write like Burgess, but to write like Burgess writing like Dos Passos. And because Dos Passos was so distinctively modern, so centrally Modernist, I needed to find a way of estranging my pre-Modern material as Modern.

In the coming weeks I’m going to post a series of essays to the Unbound site about the decisions I made and the process I undertook to bring The Black Prince to completion. I hope I have done justice to Burgess’s extraordinary conception. And I hope you are able to pledge towards the publication of the result.