The story of two Michelin star-crossed lovers set at a Brighton hotel run by three generations of one family. 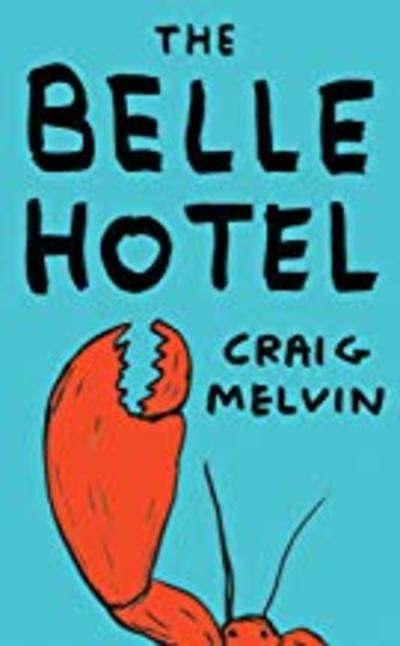 Fiction | Food & drink
You made The Belle Hotel a reality. It's available in all good book stores now.
$8
26 pledges

Signed 1st edition hardback, ebook edition and your name in the back of the book
$75  + shipping
12 pledges

The secret recipe for Lobster Belle Hotel, the recipe that won Charlie his Michelin star. Hand-written and signed by the author on a Belle Hotel David Shrigley artwork postcard. Plus signed 1st edition hardback, ebook edition and your name in the back of the book
$145  + shipping
7 pledges

Pitch Your Novel to Nick Sayers

Your space on a 15 minute per person, one-to-one, pitch and manuscript feedback session with Nick Sayers, publisher at Hodder and editor of David Nicholls, Tana French, Noah Hawley, Antonia Hodgson, Robyn Young and many others. Pitch your novel to Nick, submit a one page synopsis and three pages of the opening chapter in advance for feedback in a 15 minute individual session per writer, plus everything at the collectable level
Travel not included, date and London location TBC
Only 7 spaces available
$150  + shipping
4 pledges

Meet at The Grand 7pm - one course at each of Craig's Brighton restaurants that he's tipping to win a Michelin Star and a kitchen tour with each of the chefs. Drag queen karaoke sing-a-long for afters. Price includes all food, booze and Brighton catering scene gossip. Plus signed 1st edition hardback, ebook edition and your name in the back of the book
$150  + shipping

As co-producer and host of The Big Book Group, Craig will host a Belle Hotel Big Book Group in London and Brighton. Other bestselling authors will be in the shows. Past guests have included Matt Haig, Tracy Chevalier, Pat Barker, Peter James, Kate Mosse, Sophie Hannah, Glen Duncan, Araminta Hall, Lizzie Enfield and Carol Birch. Tickets are included to the show for all book groups that have bought this package. http://lunarlemonproductions.com/big-book-group https://facebook.com/TheBigBookGroup/ Price includes five hardback copies of the book, five digital downloads, a set of book group questions and interview with the author. Ten tickets for a Big Book Group show in Brighton or London are included in this package.
$190  + shipping
3 pledges

Meet at The Savoy 7pm - one course at each of Craig's current fave places and we'll be joined by a MasterChef/Michelin Star Chef en route. Spot other foodie celebs through your craft beer goggles or the bottom of your espresso martini glass and join in with a Soho foodie sing-a-long. Price includes all food, booze and insider London catering scene gossip. (One place per pledge.) Plus signed 1st edition hardback, ebook edition and your name in the back of the book
$225  + shipping
1 pledge

Signature Dish Named After You

Omelette Arnold Bennett plays a part in the Belle Hotel Story as do other dishes named after people such as Peach Melba, named after opera singer Dame Nelly Melba, and Oysters Rockefeller. Craig will weave the story of a dish named after you, or your family (or your pet) into the plot of the book. Plus signed 1st edition hardback, ebook edition and your name in the back of the book
$225  + shipping
1 pledge

Limited Edition hand made recipe book with twenty recipes from the novel. The recipes will appear as they are described in the story... Omelette Arnold Bennet scrawled on the back of a Savoy Hotel menu, Tarte Tatin on a postcard sent by Charlie from France to his grandfather at Belle Hotel in 1988. Book is leather bound folder, a replica of Franco Sheridan's book of Belle Hotel from the novel that held all his recipes and receipts. Plus signed 1st edition hardback, ebook edition and your name in the back of the book
$375  + shipping
1 pledge

Razor sharp, kitchen ready and in their original wrap that bears an authentic Albert Roux hollandaise sauce stain from 1989. Plus signed 1st edition hardback, ebook edition and your name in the back of the book.
Only 1 available
$1,500  + shipping

Your name as one of the patrons in the front of the book plus 10% of Craig's film rights, a signed book and your name in the back of the book
Numbers limited.
Plus 31 signed books

The Belle Hotel is the story of one hollandaise and two Michelin star-crossed lovers. It is set over three generations of one family at a Brighton hotel that's the seaside hangout for actors, artists, rockstars, politicians and dirty weekenders.

The book opens on the worst day of chef Charlie Sheridan's life, the day he's about to lose the two loves of his life: the Brighton hotel his grandfather started in 1973 and his long-suffering girlfriend, Lulu. It then takes us through the next four decades, from the training of a young chef in the seventies and eighties, through the hedonistic nineties when Charlie wins and then loses his Michelin Star, to the credit crunch and the worst day of Charlie's life. We also follow the career and love life of his childhood sweetheart, Lulu, as she makes her way in the great restaurants of London; Quaglinos, The Savoy Grill and The Wolseley before being drawn back to Belle Hotel, Charlie and the catastrophic effect of family secrets.

The book contains over thirty original recipes and receipts from Belle Hotel's four decades. Think of it as three books for the price of one: a novel, a cookbook and a how-to (and how-not-to) guide to opening a hotel and restaurant.

If you've ever wanted to know what it's really like shooting for a Michelin star and you love an off-beat, bittersweet and salty love story, then this is the book for you.

"Charm, elegance and wit... a foodie One Day." The Big Book Group