It isn’t true. Honestly. At least, not the unwashed bit. I simply couldn’t resist a David Bowie song title and a shed pun in the same sentence. The Somewhat Slightly Dazed part is a different kettle of poison. More or less my default position.

(For the heathens among you. Unwashed and Somewhat Slightly Dazed; Track 2; Space Oddity. No official video or sound recording but lyrics can be found here. For an altogether out of this world experience, I suggest you imagine me singing them or even better my sister Ruth, if you know her)

Lovely supporters whose brains are not addled by crowdfunding japery, I beg you to lend me your neurones, adorn your thinking caps or at least let me try them on for size. I am only capable of thinking in 140 characters or less and most of those are !!!! or grimacing emojis.

The Beyond Caravaggio exhibition has started at the National Gallery. It runs from October until early January. Each time the exhibition is mentioned on Facebook or Twitter it gets thousands of likes, loads of shares, hundreds of comments. There are, as I suspected, several trazillion Caravaggio fans out there in cyberspace. And among those trazillion, there must be at least 200 or so who could make up the missing pledges for my book.

So how am I going to attract them? I had this great idea of messaging every single person who commented on one of the Facebook threads. Not being friends with many (any) of them, I knew the messages would go into the filtered message folder, but I counted on one or two getting through. Which they did (and the recipients very kindly expressed an interest but as no one pledged I suspect they were humouring me). Anyhow, thirty or so messages down, Facebook blocked me.

We have noticed some unusual messaging activity on your account…

Serves me right. Spam city over at Helensville. Not my brightest idea.

I’m serious when I say I need your help. I know amongst those folk there are certain to be people who want to read the book (as a Caravaggio fan myself, I’m pretty sure I would). So if any of you can think of some inspired piece of focussed marketing to catch the Caravaggio crowd, I would be forever indebted.

My best idea so far is to cut off my husband’s head and stand outside the National Gallery in a red cloak and green dress with his head on a platter handing out flyers. All well and good, but his name isn’t John and I’m no Salome so that ain’t gonnae work. 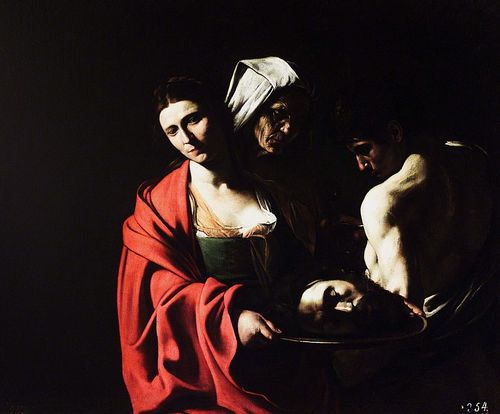 Pledges are still coming in but it has slowed a little this week. That is inevitable, I think, as most of my immediate contacts and friends of friends have already pledged their support. Of course I’d love the book to gain pledges for my own sake, but I also feel a real responsibility to crack the crowdfunding for the sake of all you lovely people who have already put your money into my project. I don’t want to let you down.

I see you're up to 60%! things are going well! Why don't you use the hashtag #caravaggio or #caravaggioexhibtion whenever you tweet something about the book?

Thanks for the idea, Lisa. I'm using #BeyondCaravaggio whenever I can, but #Caravaggio will probably work well too.