My sister, that is. Fortunately when we’d been stuck on the train earlier in the day I’d had the foresight to show her the evening’s extracts. By that time, I was already croaking. Two reading gigs down, overexcitement and a viral lurgy with an irritating cough that was…how shall I put it…irritating.

Earlier the previous week, as part of my Backstreets mini-tour of the UK, I’d played to a full house in Blackwell’s in Edinburgh along with three of my fellow Unbounders, Tabatha, Ian and Natalie. A great night with a fab audience. The time whizzed by and before we knew it we were chucked out into the pouring rain by the Blackwell’s staff who actually had homes to go to. I’m blaming no one for my ensuing bronchitis.

By Friday, had it been Spring, I could have easily blended (un)harmoniously with the frog chorus that blasts out at that time of year from the pond in the garden two doors up from my house. (Incidentally, Spring is a tragic and dangerous season on our road; the body count of car-squashed amphibians is so high as to make it hazardous to cross without slipping.) As it was, one of my trusty friends (who had already attended two of my events and foolishly agreed to ferry me to North Berwick and sit through a third) promised to stand in should the need arise. Frankly, I’m pretty sure she only made that promise because she thought I was kidding. As it was, a stand-in wasn’t required. Mainly because no one was listening.* Ozzy the Labradoodle was showing off big time and totally stealing the limelight. I suppose I could have lain on the floor and shown my tummy too, but I don’t think it would have had quite the cute-appeal of a fluffy dug. 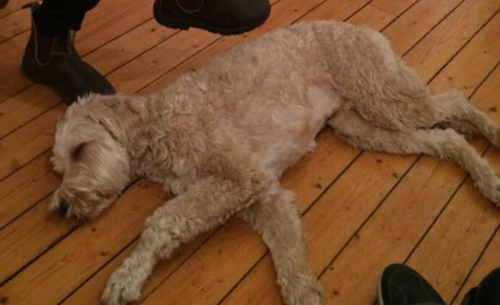 Ozzy: has he warn himself out with his cuteness or has he fainted from all the sweary words?

*Not actually true. Written entirely for dramatic effect. Another great audience at Fidra Fine Art who tolerated the Backstreets swearing with barely a flinch and giggled (at times uncontrollably) in all the right places.

Off down south at the weekend. On Monday, the Beyond Caravaggio exhibition at the National Gallery. I took my pile (pile-ette) of flyers** but wimped out of handing them out to random punters. What I did do though was leave a few with the gallery because (I have to write this bit in extra large letters to metaphorically shout it from your screen because I can’t stress how absolutely thrilled I am by the whole idea):

Dr Laura Rorato, Senior Lecturer in Italian at the University of Hull is going to mention The Backstreets of Purgatory in her exhibition-related lecture at the National Gallery on Monday 28th November. Michelangelo Merisi da Caravaggio: A pop(ular) icon.

How flipping amazing is that. Here's a screen shot to tell you more. 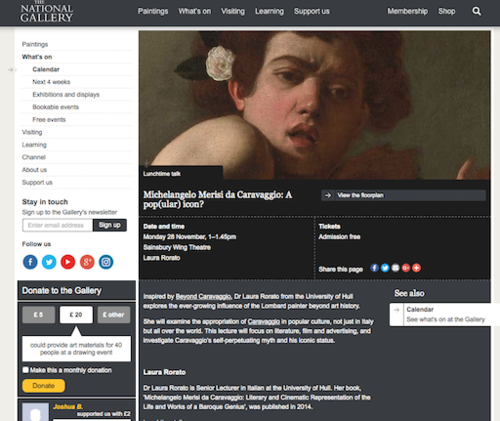 **Flyer quiz and answers coming in a separate post when I can think of a suitable cringeworthy shed pun to go with them.

The exhibition was a treat. There were two Caravaggios in particular that I hadn’t seen before and always wanted to see: The Taking of Christ and John the Baptist in the Wilderness. The Taking of Christ makes it into Backstreets and is discussed by Finn in some detail. This John the Baptist doesn’t. But what a picture. I could have stood for hours in front of the brooding adolescent. He is beautiful and sulky and lost in a world of his own troubles and whatever your religious leanings (in my case, none) I challenge you to look at it and not to have the hairs on your arms stand up.

(Talking about hairs standing on end, I recently discovered a very large and active Reddit group whose discussion is devoted solely to pieces of music that give you this same frisson. The group is called…yes, you’ve guessed it…Frisson. I love it that there are so many barmy people in the world.)

So, here we are. On the train (delayed). Me barely able to speak. My sis scanning through Tuesday McLaughlin’s attempt to get her tattoo at Rob’s shop. When the train finally chugs off and we eventually make it back to her place, I down half a bottle of blackcurrant and glycerine linctus (which, for future reference, will go excellently in a glass of Prosecco) and we’re all set for the upstairs room at Barista Lounge in Farnham. Thankfully, I’m among friends (or at least, friends of my sister's) and I can feel the sympathy as I wheeze and choke through my first reading. Goes down well, get loads of questions (I love that!), I answer and move on. Only even before Tuesday has kicked the tattoo parlour door and stubbed her middle toe, my voice grates to a squeaky standstill. Like a train stuck on a frozen points (see what I did there…the train thing…except we were delayed because a door was jammed, nothing to do with frozen points...oh well, I try).

Wordlessly I hand my sheets of paper over to my sis. She’s had a glass of wine so she’s totally up for it. And she reads it brilliantly (no stutters, not even phased by the tadger paragraph). What a star. Like I said, she smaSHED it.

Ah, the squirrel. Don't worry. I'll tell you his entire backstory and what he's up to now in squirrel land. run 3 online