‘Are you a plotter or a pantster?’, asked the lovely Tabatha Stirling at our recent Unbound event in Edinburgh. We were talking writing styles. A plotter is pretty much self evident. A writer who has the story plotted out before they start. But what, you may ask, is a pantster? It is, as Tabs explained, someone who flies by the seat of their pants.

Here are some (almost) flying pants. 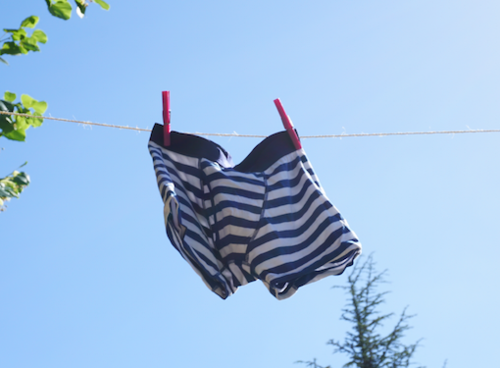 So what am I? Plotter or pantster or something in between.

I started The Backstreets of Purgatory when I was writing for an MA and my approach was definitely influenced by that. The knowledge that we had to produce a portfolio not only of our creative writing but also an in-depth analysis and reflection of our individual writing process certainly made me think more about how to plan the book. At the time I was also reading lots of theory, thinking in detail about story arcs and character motivation and the like. And a lot of what I was reading made perfect sense to me.

Somehow, though, being a pantster seems way cooler than being a plotter. It feels much more free-thinking, experimental, brave. Much more how I’d like to be. But the whole idea gives me the heebie-jeebies. When I wrote The Backstreets of Purgatory, there was a lot of plotting involved. The free-thinking stage took place long before I tapped out the first words on the screen. If you want to see what free-thinking looks like, you could try deciphering the pages and pages scribbled in my numerous notebooks.

That ‘what if…?’ is a bit like spiking Great Aunt Ada's lemonade with vodka at a family party and filming the fall-out. If you're really lucky it'll be hilarious but more often than not it's just painful.

It is within these pages that I invented the characters and got to know them, where I tried out storylines and rejected them, where spent hours asking ‘what if…?’ to challenge my characters or liven up events. That ‘what if…?’ is a bit like spiking Great Aunt Ada's lemonade with vodka at a family party and filming the fall-out. If you're really lucky it'll be hilarious but more often than not it's just painful. My notebooks are full of notes to myself in the margin, most of them along the lines of ‘Don’t be so f**king stupid, H’. And although this stage was all pretty experimental, very much a ‘let’s see where this idea takes me’ kind of approach, I knew there was absolutely no way I could start writing the actual novel without a detailed plan. I had to know where I was going or I would certainly get lost on the way. You know the thing. You’re pissed at the party (along with Great Aunt Ada), your friends have all left and you can’t remember how to get her home. There was no way we were going to get there safely by chance. I had to keep a clear head.

In my defence, the plot of Backstreets is complicated. There are lots of characters and their stories are interlinked. As far as I was concerned, I had to keep tight rein on them all to stop the party from getting out of control and the police being called. Even for the first draft of each chapter, I had to know the beginning, middle and end, and all the crucial plot points and character developments that needed to be included.

That’s not to say that I stuck rigidly to the plan the entire time. After the first draft, I allowed myself a bit more freedom. It was easier at that stage to tell what was and wasn’t working. And believe me—as a few of you reading this will attest—there was plenty that wasn’t working. In the end I did three major rewrites and multiple smaller ones. It was essential get rid of all the parts where the events seemed shoehorned into the story or people acted out of character just to make certain things happen. Events had to unfold naturally (or as naturally as they can when Caravaggio turns up in Glasgow)*. After a while, I let the characters dictate their own lives to some extent. But even then, I knew where we were all heading. Always one eye on the road.

Recently, I put Tabatha's question to several novelists and you’ll be able to read their responses on my other blog very soon. Everyone I asked took a different approach. It is fascinating to me (as an 90% plotter, 10% pantster) that anyone has the nerve to set off and just see what unfolds. Even thinking about it is almost giving me an anxiety attack. But these different approaches are part of what makes every writer’s style different, of what makes our books unique. And that, I reckon, is extremely cool.

* I’ll find out soon how successful or otherwise I was at this when I get my editorial comments back. It is a nerve racking time.