Bacchus: the Roman god of wine and all things grape-related, of unrestrained consumption and the ritual madness that accompanies it

PiSHED? No, not me. At least not since drinking a cocktail of Bacardi, Sprite and green food colouring in a hot tub under the moonlight in a garden somewhere in the west of Scotland while my friend tried to convince me the concoction was a mojito. Don’t say a word: 1. I’m well aware that this behaviour isn’t normal;  2. I do know a genuine mojito when I see one even if it’s dark outside; and 3. yes, I suffered the next day. However, I have to admit that much to my surprise (and the green food colouring apart) the whole experience was rather enjoyable and I’d never have had myself down as a hot tub kinda wifie. The massaging effect of the jacuzzi bubbles…ok, I should stop. Too much information.

Where was I? Yes, piSHED. Pished. Bacchus, I’m talking about. Bacchus: the Roman god of wine and all things grape-related, of unrestrained consumption and the ritual madness that accompanies it (hot tubs, cocktail concoctions). Bacchus: rather startlingly represented in Backstreets as Finn’s decrepit, alcoholic next-door neighbour, Maurice O’Donnell (of O’Donnell and Sons). Although, frankly, old man Mo is more Sick Bacchus than the young revelling type.

In fact, to be blunt, even Bacchus at his most ailing looks the epitome of good health next to Maurice. Incidentally, it wasn’t Caravaggio who gave his painting the title Sick Bacchus. It started life as Self Portrait as Bacchus. The Sick moniker was added much later by the Italian art historian Roberto Longhi, the instigator of Caravaggio’s modern renaissance and the man who curated the 1951 exhibition in Milan that brought the painter back into the public eye after a century or two lingering in the shadows.

In case you were unaware of it, this is where I admit to a slightly alarming obsession with diagnosing medical conditions in works of art. An enlarged thyroid here, an arthritic knee there. A breast lump here, a pustulating ulcer there. So a painting with a title like Sick Bacchus is manna for my fixation. But the diagnostic process on an image alone, however masterfully or accurately rendered, isn’t without its limitations (not to mention the limitations imposed by the however-many years that have passed since I last slung my stethoscope around my neck in an effort to fake the appearance of being at once professional and yet utterly nonchalant). It isn’t just me though. Even for two of the most studied and debated painting-based pathologies—Rembrandt’s Bathsheba at Her Toilet and Quinten Massys' An Old Woman (The Ugly Duchess)—there is apparently no academic or medical consensus on the diagnoses. (You’ll be delighted to learn that an exhaustive account of the minutiae of these discussions will—at some time in the near future and assuming I get my act together—appear on my own website. ‘I am beside myself with anticipation,’ I hear you cry.)

Fear not. There follows, for your delectation, a short(ish) disquisition (incidentally, a word I’ve never used before) trashing the various hypotheses (raised in The Journal of the Royal Society of Medicine and other such esteemed publications) that Sick Bacchus is in fact suffering from acute (or chronic) liver disease.

[Aside 1: A similar thesis in an absurd paper from Frontiers in Psychiatry claims to diagnose both the physical and mental (I kid you not) manifestations sustained by overindulging in the beverage department in another Caravaggian Bacchus. But that delight I will save for another time.]

[Aside 2: my first attempt at the sentence above ended ‘another of Caravaggio’s Bacchuses' but I suspect, in fact, that the plural of Bacchus is Bacchi. If anyone is able clear this up for others who may encounter similar doubts—and naturally they will be manifold—I am sure they will be extremely grateful.]

Jaundiced or just a little peaky? 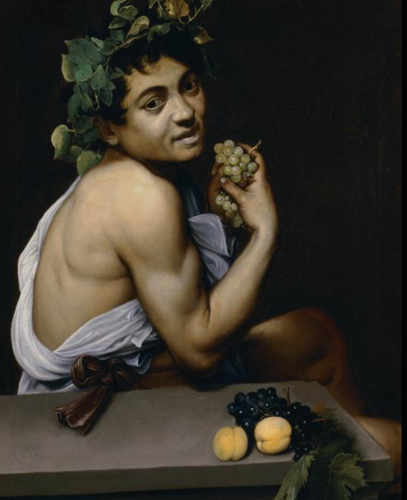 Let’s go back to how the painting got its nickname in the beginning. Longhi’s reference alluded to Caravaggio’s state of health around the time he painted this self-portrait. It isn’t hard to convince oneself that our Bacchus is a bit off colour. The bloke is grey. Verging on pale green. A sickly pallor stains his skin and his lips.

Longhi put the painter’s peaky complexion down to a bout of malaria, a disease named for the ‘bad air’ of the marshes of the Roman Empire (the marshes, of course, being an excellent breeding ground for the mozzies that transmitted it) and which, in the sixteenth century Italy, was enjoying something of a rejuvenation. And although that explanation appeals by uniting two of my anomalous fascinations, I can’t say I’m convinced. The Aronson paper goes further, claiming that the most likely explanation for Caravaggio’s episode of unexplained jaundice is an acute infective hepatitis (brucellosis or Q fever, perhaps, or even a viral hepatitis) particularly as the artist recovered relatively quickly from whatever landed him in the hospital.

But that, I would conjecture, is merely speculation on a background of misinformation. For a start, there are major problems surrounding the interpretation the complexion of the peely-wally Bacchus. First and most obviously, this is a painting. Who is to say that Caravaggio reproduced his skin shade exactly as he saw it? And the tones and hues would have been affected by lighting (or the lack of it), by however discoloured the reflecting surface of the mirror was (we assume he used a mirror), by his artistic choices, by the day of the week (ok, maybe not the day of the week).

Be that as it may, you don’t have to squint too much to see that the digital image of the painting in the Aronson paper appears to have had the yellow and green saturation cranked up. I’ve seen the original painting but, to be fair, my memory of the precise shade of skin tone wouldn’t stand up in a court of law. More convincing though is a comparison the photo in the paper with the digital image of the painting used by Galleriae Borghese itself which, one would assume, replicates the colours as closely as is digitally feasible.

There is, then, at least a doubt over whether the young Bacchaggio (see what I did there) actually has jaundice. A doubt that casts its bilious disposition over the diagnosis of our sickly deity with an alcoholic liver (acute alcoholic hepatitis or cirrhosis) as has been speculated elsewhere. Plus, considering this is a self-portrait of the artist as a young man—a young man presumably not that long acquainted with the drinking dens of Rome—he’d have really had to have been knocking back the pints and to have been catastrophically unfortunate to cause himself that amount of liver damage in such a short time.

So if it wasn’t malaria, or an infective hepatitis or a bout of intemperance, what did put the artist in hospital? According to my source of all information Caravaggian (AGD, below) and with evidence to back it up, the most likely account of Caravaggio’s illness and hospitalisation is that he was kicked in the who-knows-where by a horse.

If I’d been booted in the wherever by a bad-tempered equine, I reckon I’d look pretty pale too. First glance at the pallor of Caravaggio’s lips and knowing what had occurred, you might suspect he’d loss a pint or two of blood after his accident and that the poor guy is more than a touch anaemic. Quick, call the paramedics. Bacchus needs an emergency blood transfusion. Oh, hang on. I’m not so sure. On closer inspection, I’d wager he isn’t about to drop down dead after all. Something in Bacc-Man’s bulging biceps suggest to me he’s healthy enough.

So what is the conclusion? Not jaundice. Not anaemia. Our Bacchus may look like a malingering reveller but his odd colour doesn’t seem to reflect his general health. True enough, I might have looked that colour the other morning after a night on the cocktail concoctions but I doubt Caravaggio was familiar with Sprite or green food colouring (and honestly, in the moonlight, I couldn’t even see what I was drinking).

In fact, that is probably the answer. Blame everything on the glow of moonlight (okay, I stole that idea from AGD).

‘The light that flares so brightly on the figure’s shoulder, giving his face its greenish cast, is simply the light of the moon.’

You know what? I’m convinced. It’s about time Sick Bacchus got a clean bill of health.

Let’s drink to that!

Graham-Dixon, A. Caravaggio: A Life Sacred and Profane. 2010. Penguin.

I am SO looking forward to reading your book! Who says scholarship is dull?

Thanks, Ewan. Do you think there is a technical term for undiagnosing a condition in someone? Maybe that should be my new specialty.