It has been some time since my last update. TBH, I can’t get used to calling them that. For those of you who haven’t been here before (in which case, welcome and thank you so much for your generosity), this spot used to be called ‘The Shed’ and my posts ‘Shed posts’. If you are a newcomer, fortunately for you, you’ve missed some of the worst puns on the word SHED that you are ever likely to come across. However, if you can bear it—if you can cope with the pun-ishment (see what I did there?)—some of them are definitely worth checking out. MaSHED is a mash-up of some of the dialogue from The Backstreets of Purgatory as voiced by my pals (sends shivers down my spine to hear my characters come alive) or if you are after a bit of Caravaggian culture, you can't go wrong with PiSHED (actually, I’m sure you could go wrong but the title is genius, is it not?)

So what has been happening since you last stopped by? Lots of people have been asking me when Backstreets will be coming out. No fixed date yet. Not before the end of the year. The unofficial date is spring/summer 2018 but supporters copies will be earlier than trade copies. Still, these things take a lot longer than I had anticipated. Thank you for being patient. The latest news about the progress of Backstreets is below but before that, do you mind if I do a bit of showing off? You do? Sorry, I can’t help myself.

I’ve been rubbing shoulders with literary stardom (and hoping some of the stardust will stick to me). At the end of last month, I was invited to speak at the Brontë Festival of Women’s Writing in Haworth. The headliner was the amazing Sarah Perry, author of the best-selling novel The Essex Serpent. She’s a brilliant speaker. So open about her life and her writing. Her talk was fascinating. Unfortunately, I forgot to take my copy of her novel along for her to sign but, don’t panic, all was not lost. At the end of her talk, I went up to chat to her and truly surpassed myself. Whatever I mumbled at her was completely incoherent and then I forced upon her a home-made mini-flier/business card—printed at home on a printer that had run out of magenta ink, and cut from A4 paper with nail scissors—in a way that couldn’t have been any more spectacularly amateurish. How many times do you think she gets fans coming up to her and telling her about their novel? Gutted I am, though, because I forgot to mention I was also a speaker at the conference, which if she had believed me may not have forgiven the rubbish mini-fliers (my excuse: I’ve just moved house, the good ones were in a cardboard box somewhere still to be unpacked) but may have made her realise that my novel does actually exist (more or less) other than merely in my dreams.

It was a pretty special weekend for me. I met some wonderful writers, poets, and playwrights, and learnt loads. My secondary school love for the Brontës was rekindled and on Sunday, I felt really special because I was on the guest list to go round the Parsonage Museum. I was surprised how affected I felt when I crossed the threshold of the house. There can’t be many other dining room tables in the world on which so many literary masterpieces have been written.

There is no surviving manuscript of Wuthering Heights but there is a cool art project going on in the Parsonage where members of the public can write a single line from the novel in a handmade book to produce new handwritten copy.

Apt for the way I was feeling.

And I got to keep the pencil. 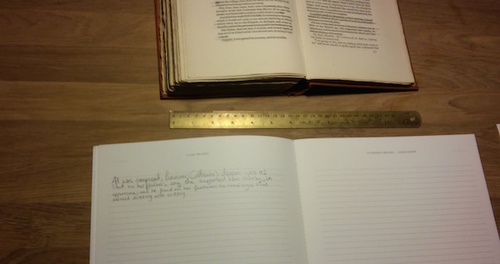 Meanwhile, The Backstreets of Purgatory has been through a successful structural edit (where my editor tells me if sections need rewritten or the story has holes in it) without too many tears. And now I’m in the middle of the copy edit. Punctuation, grammar, spelling, timelines, the tiniest details of the story.

The copy editor has done a phenomenal job. Some of the corrections are house style so I’ll forgive myself those but there is plenty of erratic spelling and punctuation which is pretty embarrassing for someone who is starting to call herself a writer. There are, in addition, some absolute classics which I feel compelled to share.

Technically, this isn’t an error. The cupboard isn’t actually moving. Really, I can’t see what the problem is...

I could count and count again the number of times I’ve mistaken this word for a payment.

No stealing this idea. I'm planning a new line of room perfumes. I'm sure it will be a winner. What do you think?

I’m stopping there. I’ve realised I’m probably not doing myself any favours when you guys have pledged and are hoping for a book that at least makes half-sense (I hope that’s all you are hoping for). Don’t worry. All mistakes will be ironed out in the next day or two.

After that it is cover time. The cover brief has been submitted. I’m waiting to see which artist has been assigned to it and what they come up with.

Great post Helen. I love(d) the Brontës too, so can imagine how inspiring that day must have been for you. We are all waiting patiently for our copies of your book. No doubt that all this waiting will make us appreciate it even more. Besides being humorous, your posts do help us understand how long and complicated the process must be. Still, could you stop being so self-deprecating! Then again, that is part of your charm.

Thanks for your lovely comments, Patricia. Could you just confirm that I haven't paid you to say that my posts are humorous (or that I have charm...that is what you said, right?) :-)