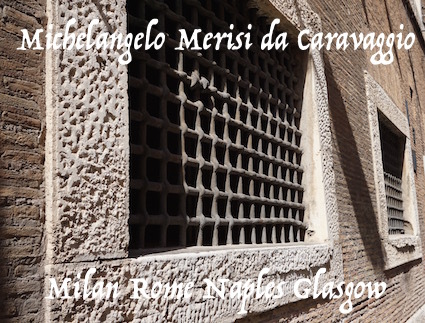 So who was he, this Caravaggio bloke? Well, there aren’t many traces of his early life but we know he was born in 1571 in the town Caravaggio in Lombardy, his real name was Michelangelo Merisi, and he was apprenticed as a young lad to Simone Peterzano, a mediocre fresco artist from Milan, although the evidence suggests young Mikey didn’t stick it out. By the time he was 21 he had moved to Rome where he went on to establish his reputation both as an artist of originality and daring, and as a rogue and a troublemaker.

Caravaggio fascinates me. His work gripped me. Even before I knew anything about his life story. Summer holidays in Italy, scouring art galleries, spotting his paintings before I was familiar with each one as I am now, guessing (failing to guess) the titles. Being delighted and frustrated in equal measure with the glaring improbabilities in the anatomy of some of the models, with the biblical and classical references that I only half understood, with the idea that here was a rebel (you could see it in the violence and sexuality of the works) and yet at the same time a man in thrall to the religious establishment.

And then I found out more. That his young female models were often his lovers but that he quite probably pimped them out. That he had friends and enemies in high places. That he murdered one of his gang in a duel that went wrong. That he fled Rome to escape justice and lie low but somehow couldn’t avoid getting mixed up in more trouble. That he escaped from a prison in Malta when there was apparently no possible physical way of doing so. And all the time he painted, and used his paintings to win favour or to induce near apoplexy in his patrons depending on…what? On his mood? On his respect for them? Or was he bound by his artistic vision and incapable of compromise?

Death was altogether more mundane. He died of a fever in the coastal town of Porto Ecolo on his way back to Rome where he believed he had been granted a pardon, and was buried unceremoniously in an unmarked grave before the heat of the summer sun rotted his corpse.

So, what do you reckon? Who was he? The hard drinking head-case who picked fights with everyone from neighbours to waiters, or overly-sensitive arty type who couldn’t understand the negative reactions to his masterpieces? The rebel who provoked the establishment with his almost blasphemous art or the deeply religious man who wanted to be accepted by the church? Was he the passionate lover who painted his women with sensuality and ardour, and or the level-headed pimp who exploited them? Were his paintings deliberately provocative or was he incapable of painting otherwise? And how much did he control his public persona, with his vicious self-portraits and disrespect for his patrons, or is it simply that myth and reality were pretty much inseparable?

But like I said before, I doubt it was an either or situation for any of these things. Wild swings between both extremes? Perhaps. For me, though, Caravaggio was a definite both at the same time.

NB Before The Backstreets of Purgatory, there were very few records (ie none) of Caravaggio's time in Partick.

For more details on Caravaggio’s life, check out Andrew Graham-Dixon’s extraordinary biography of the painter, Caravaggio, A Life Sacred and Profane, Penguin, London 2010.