Did It Collapse or Was It DemoliSHED? 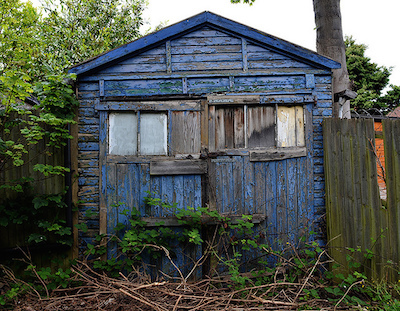 The Shed is no more. DemoliSHED perhaps. Although I’m sure you guys aren’t complaining. You probably WiSHED its demise had come a bit sooner. But I’m gutted. My plan has been KiboSHED. I had still to use my two best (best as in ‘least contrived’) puns (FiniSHED and PubliSHED), not to mention SkirmiSHED, BrandiSHED and SlaSHED (which given I’m writing about Caravaggio shouldn’t have been too difficult to shoehorn into suitable posts). GatecraSHED and AmbuSHED were also waiting in the wings.

However, I reckon the new Unbound site looks great. Instead of The Shed there are Updates which will effectively be the same content without the Shed puns. And the new logo is smoking. (Fear not, the shed puns might be over but the bad jokes are not.)

So, the manuscript for Backstreets is with my editor. And I am nervously awaiting comments. However much I say I’m ok with criticism…

(This is supposed to be an animated GIF. If she isn't chewing frantically, click on it. GIF courtesty of GIPHY)

I wrote a blog post on my website about the mixed elation and terror of the idea of the work going public. You will be my biggest audience to date (I’m making assumptions about the circulation of the publications where my short stories and poetry have previously been published which may be completely unjustified). And not only are there more of you, you’ll be with the work for longer than for anything I’ve published before. Three thousand words of a short story or three stanzas of a sonnet versus the thirty something chapters or a hundred and thirty thousand words of Backstreets. (It has been cruelly suggested, however, that were I to remove the expletives, the entire novel would actually fit on a Post-It. This is a blatant misrepresentation of the book. It would fill at least two.)

To test my nerve and public reaction, I’m going to post a short story that was published in The Ranfurly Review a few years ago. When I read it now, I can tell that I hadn’t been writing for that long although I do still like it bar the odd sentence here and there that jars. You  know what, maybe I’ll give it another quick edit before I post it (see, my nerve has failed me already). In hindsight, the main character, Ade, seems like a forerunner of Finn from Backstreets. The two of them certainly look similar in my head. As for their personalities, I’ll leave that for you to decide. Once I pluck up the courage to post it here. Once you’ve had the chance to read the full version of Backstreets.

In the meantime, a bit of news about an upcoming event. If you are in Edinburgh on the evening of Wednesday May 10th, I’m doing a reading with three other Unbounders. Details are still being finalised but it should be a good night. Come along and heckle (the others).

Don’t forget that although The Backstreets of Purgatory is fully funded, you can still pledge for it right up until the pages are printed (more or less). And if you need to change the name in the back, you’ve got plenty of time. You’ll be prompted by Unbound nearer the time.

And finally a quick hello and thank you to my new supporters. Lovely to have you as part of the crowd.

It is an absolute joy for me to know that you are appreciating the novel (or keeping very quiet if you hated it!!). soundcloud downloader apk

You have given very useful information. Keep it up and keep blogging. I look forward to reading your next post. lol bean