The first proofs for The Backstreets of Purgatory have arrived. The only parts that are missing for the moment are the acknowledgements and the list of supporters. Which means that new supporters can still get their name listed up until 27th November 2017. After that it will still be possible to order the book but you won’t be listed as a supporter. However, if you are reading this, the chances are that you are already one of the lovely people who will be on that list (there are six blank pages ready for your names). If by any chance you know of someone who had intended to pre-order but has forgotten, could you mention the deadline to them for me, because I wouldn’t want them to miss out. 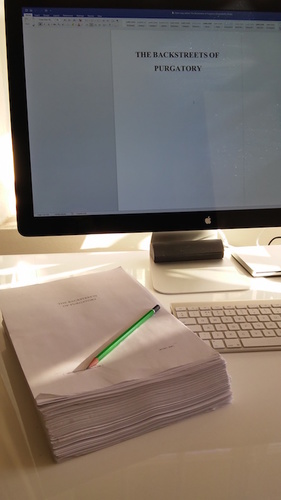 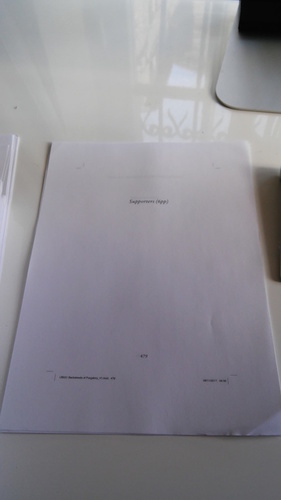 I’m cross-eyed and cricked-necked checking the page proofs for any errors that might have escaped us at the copy edit stage (do you like the way I used the pronoun us there, as if I was as involved in the copy edit as the amazing Morag who found all my mistakes, when in fact my role was simply to go, ‘Oh yes, thanks for pointing that out,’ <accept change>?).

It is absolutely amazing to see the novel printed out like a real book (albeit without a cover). I had a wave of pure excitement when I saw it (swiftly followed by a minor anxiety attack). In recent post, I said we had a cover, but Isobel (Unbound’s art director) sent me a completely different cover last week. The original version she felt wasn’t balanced enough and that it wasn’t immediately obvious what type of book Backstreets is. The new one is equally as cool as the first (but we are waiting for permission to reproduce some images so I’m not revealing anything or getting my hopes up too much at this stage). I was thrilled to also get a message from Isobel saying that she had ‘hoovered up the book’, ‘couldn’t put it down’, ‘enjoyed it massively’ and that she had exchanged screaming texts with Rachael, my editor, about the ending. It is so wonderful to get feedback like that. To know that someone has been affected by and really involved in the book. In fact, it made me realise how important it is to a writer, so I promptly messaged the author of a novel I’ve just finished to tell her how devastatingly brilliant I had found it. (Tony Hogan Bought Me an Ice-Cream Float Before He Stole My Ma by Kerry Hudson. Don’t be taken in by the cover and the cover quotes. Superficially it looks like a comedy. It has some excellent laughs in it but it is one of the most devastating books I’ve ever read.) I thought I was maybe being a bit fan-girly but she was delighted to get my message. I'm going to do it all the time now.

Before the proofs for Backstreets could be printed, I had the very enjoyable task of choosing the typeface from a couple of examples that I was sent. Both were very pleasing and relaxing to the eye but one would have made the book well over 500 pages, and as DeAndra (the eagle-eyed editor responsible for turning the manuscript into an actual book) said, ‘You don’t want it to be a weapon.’ Naturally, I chose that one (kidding).

However, even with the smaller of the two typefaces, seeing the bulk of the manuscript (admittedly double thickness because it isn’t printed on both sides) and considering it will also have the hardback cover, it's clear that the finished Backstreets is going to be a whopper of a creature. DeAndra’s comment got me thinking. So here are 5 uses* for a 500-page hardback (which don’t include using it as a weapon).**

*once you have read it obvs

Wow! It's really happening! We're all so excited for you! I think the suggestions for using your book will be very useful, especially for the frequent occurrence of moving when there's a hurricane going on. I personally know a short, very prickly animal who could do with the book to use as a step to be able to eat biscuits from the cat's food-bowl more easily. Or you could carry it (the book, not the hedgehog) in your bag to use in an emergency if you come across someone with a flat tyre who doesn't have a jack in their car.

Excellent ideas, Lisa. Can I steal them for my marketing campaign?

Brilliant Helen, I had all the same feelings (without any hardback prospect to inspire alternative uses) and yes, totally, to that twinge of anxiety (I call it the author's cot-death syndrome), but also more positively to telling authors what you think. simon