Just a quick update to let everyone know that I'll be on the author panel of Winchester Comic Con this Saturday (March 25th). If you're nearby and fancy a day of sci-fi fun, do stop by and say hello! It would be great to see you (and, if you're supporting Ten Little Astronauts, to take the chance to say thanks in person). 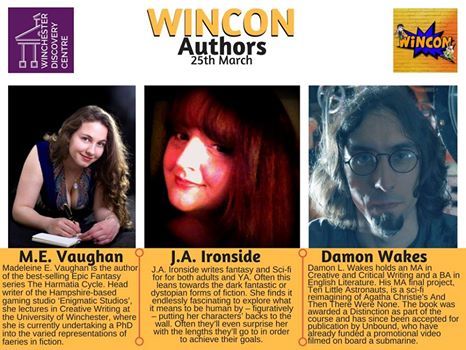 It's set to be a busy day, particularly because advance tickets have already sold out. Given that this is the first ever event of its kind at the Winchester Discovery Centre, that was somewhat unexpected. Still, there will be a limited number of tickets available on the door so if you're already in the area then it's certainly worth checking out!

If you can't get to WinCon, there's one more chance to meet me. From the 30th of March to the 1st of April, I'll be attending EGX Rezzed at the Tobacco Dock in London. This is a games trade fair in the vein of EGX proper, which is where I discovered Craft Keep VR back in September. After getting in touch with the developer, I ended up writing the story for this thing! The game sees you take on the role of an artisan who sets up shop in various interesting locations making medieval goodies for the quirky characters who pass by. It's actually quite similar to my own craft fair escapades, only with more barbarians and fewer dainty necklaces.

The finished version of Craft Keep will be on display at this event, so if you're a gamer yourself and fancy a sneak peek at some of my non-Ten Little Astronauts work, now's your chance. It's a room-scale virtual reality game, so for most people (including me!) this is your best chance of having a go. The technology needed to play it (VR headset, motion controllers, and a PC capable of supporting those things) is still a step beyond what most people will have knocking about at home.

Every games event I've visited so far has been hugely instructive, and I'm hoping this one will give me a few more ideas about the interactive story I'll be offering as a reward to the first 150 supporters of Ten Little Astronauts. The plan at the moment is to have the whole thing set aboard a very large spacecraft and use the supporter list to name the crew. That would be a big job, but at the same time 150 supporters would be a big milestone, and I think it would be worth it to do something to say thanks to everyone who's put their support behind this book so far.