Unbound's birthday celebrations continue, this time with a discount and a giveaway both running until the end of the month! The promo code MayDay will give you 15% off anything in the fiction list, and you'll get two free ebooks to boot. Which books you get depends which day you put in your pledge, so take a look at the selection on offer:

Naturally, if you know anybody who might be interested in Ten Little Astronauts, it would be great if you could pass this code on to them so they can take advantage of the deal and grab some free books at the same time. The last site-wide promotion Unbound ran was what got my book up to 30% funding, so if you could help spread the word about this one you'd be making an absolutely massive difference there.

Also, if you'd like to grab a couple of free books yourself (Ex, Saving Bletchley Park, and Why Did the Policeman Cross the Road? all catch my eye), all you have to do is put in a pledge. If you're looking for something similar to Ten Little Astronauts (in one way or another), here are a few books I personally recommend:

The first three of these all have fewer supporters than Ten Little Astronauts so far, so if they take your fancy enough to warrant a pledge, you'd really be helping those authors out. Cull and A Murder to Die For are further along in their campaigns (A Murder to Die For is fully funded already) but they're great books and I'll be disappointed if they're not hugely successful. 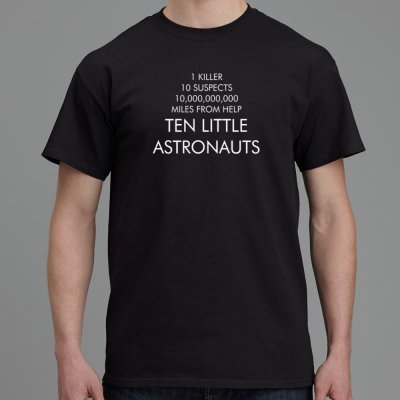 In other news, there are some book events coming up, including the Hampshire Writers' Society Gala Evening, where I'll be appearing as part of the Members' Book Fair, and the Winchester Writers' Festival. I've taken the opportunity to put together some Ten Little Astronauts swag, and depending on how it goes down it's possible I'll be adding some of that to the supporter rewards. I'll likely have another update about that (and the upcoming events where you can meet me in person) very soon.

Until then, please do what you can to share this promotion - it's a great time to get new people behind the book - and keep an eye out for the next milestone rewards. Harvest Moon is nearly ready to share with you, and we're so close to 150 supporters! Remember, the first 150 get their names featured in a brand new interactive sci-fi story: now's your chance to see your friends in there too!

Loving the t-shirt. Is that going to be part of the swag bag?

Have you thought of having a book group pledge? 10 copies to one address and the book group named instead of individuals? Could juice it up with an author visit? Just an idea!