It's been exactly a year since the publication of Ten Little Astronauts, and a whole lot has happened since then! I've talked about the book at Hampshire Writers' Society, Reading Writers, Portsmouth BookFest and Waterstones Winchester (among a whole bunch of other places), and it's already made more of an impression than just about anything else I've ever written. More than that, though, it's put me in touch with a lot of truly fantastic people (going back to way before it was actually released). 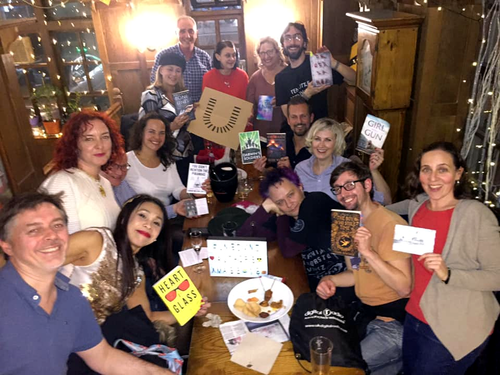 This photo is from a festive get-together of Unbound authors just last week, but I'd met quite a few of them before. Also, it's nowhere near a complete illustration of everyone I've got to know because of this book - that photo would be way larger, and probably highly impractical to take.

To mark the one-year anniversary of the book (and because this year's updates to the Unbound website made it difficult to share any earlier), I'd like to point you towards "Staying Strange," an electronic track by Jordan Dean Ezekude based on the opening of the book, which you can listen to by hitting the play button at the top of this page (or on his SoundCloud, which you might like to check out too).

I also wanted to mention that Unbound are currently including Ten Little Astronauts in one of their Christmas book bundles. I don't expect it'll be of particular interest to anyone who already owns the book, but it is nice that they're still actively promoting it months after release. 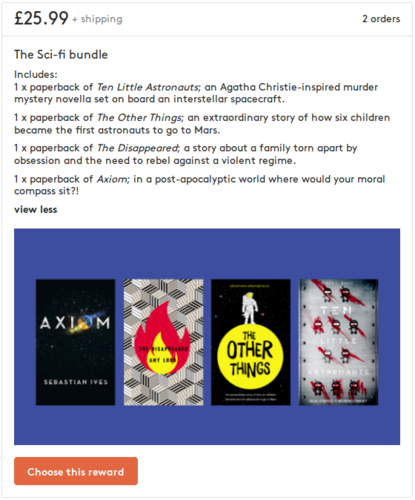 Updates on Unbound will likely be very rare from this point on - I'll only use them for particularly big news that's directly relevant to the book - so if you'd like to keep up with my writing, I recommend subscribing to my newsletter. I aim to send it out once a month, and definitely no more frequently than that: it's essentially a summary of things that would either be spread across a whole bunch of different sites or easily lost in the noise on Twitter and Facebook.

Finally, if you've read Ten Little Astronauts but haven't yet written a review, please consider leaving one (or even just a quick star rating) on your book site of choice. It makes an absolutely tremendous difference - essentially dictating whether certain sites will show the book to browsers at all - yet only a tiny fraction of readers actually do it (something like one in ten, by my reckoning). Currently Ten Little Astronauts is just shy of 100 ratings on Goodreads, and it would be great to reach that milestone by the end of the year. If you'd prefer Amazon, this link will take you to the book on their various regional storefronts. Alternatively, if you tend to use any other shop, the book's page on my website links to most of the main ones.

Thanks again to everybody who supported the book back when it was funding, and also everyone who's helped it come so far since!