Ten Little Astronauts has reached 33% funding: a full third of the way towards making it into print! 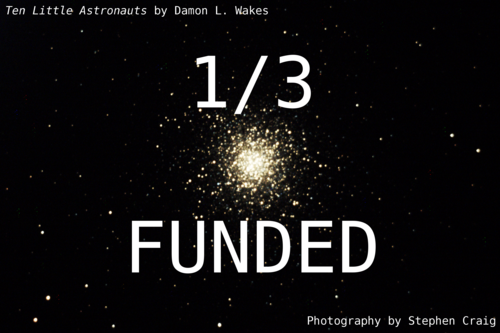 This is quite a milestone, and the video above describes just a few of the rewards that I've released at various other milestones along the way. However, if you've recently put in a pledge and want to get right to the goodies, here are some direct links to those:

At 35% funding I'll be releasing a creation myth from the world of Face of Glass, my prehistoric fantasy novel, but before then there are a couple of other rewards you can get in on.

One other thing it might be worth mentioning at this point (though it's kind of a minor milestone really) is that half of the anodised aluminium necklace pledges are now spoken for. If you were planning to go for one of those, you might want to do that soon because these things have a way of being snapped up pretty quickly once it's down to just the last few.

Finally, I'm nearly halfway through Flash Fiction Month 2017 so if you'd like even more stories then there are at least a dozen right over here. After the end of July I'll be collecting the whole lot together into an anthology that'll be going out to everyone who's pledged at the Collectable level or above. One of the first 175 supporters will also be chosen at random to receive the very first copy of the paperback in existence, so be sure to tell your friends!

In general, anything you can do to get the word out about Ten Little Astronauts will make a massive difference to its chances of success, so if you'd care to tweet a link to this update or share it on Facebook, I would very much appreciate it.