Ten Little Astronauts has now reached 30% of its goal! If you're one of the lovely people already supporting it, keep an eye on your inbox for Harvest Moon, the folk horror story I'll be sending out as the 30% milestone reward. There have been a lot of new pledges just this past week, so if you weren't around for the 20% and 25% rewards, you might like to check those out now: the former is an audio version of the first chapter of Ten Little Astronauts, while the latter is an interactive sci-fi story, My Name Algernon, written as part of the same MA course as Ten Little Astronauts itself. 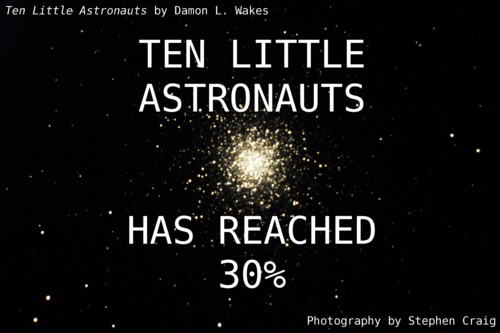 The response from readers over the past few days has been truly astounding, and it's given Ten Little Astronauts enough of a boost it's currently trending on Unbound! That means it's more likely to appear to people browsing the books on offer and thus more likely to attract new pledges. If everybody currently supporting the book could find two friends to do the same, we'd be literally 90% of the way there, but if you can find even one friend to jump on board now that would really help keep up the momentum and hopefully get you your book that much faster!

There's also a bit of an incentive to get people on board early in that (again, thanks to the recent surge in interest) the 150 supporter reward is coming up fast. At the time of writing there are 135 supporters, meaning 15 places left, and it's worth noting that Unbound recently changed the way it counts multiple pledges from the same person: under the old system, we'd be up to 141 already! Essentially, the next 15 supporters will be among the 150 who get their names included in the interactive sci-fi story I have planned. Everyone after that will have to console themselves with whatever fun thing I do when we reach 175!

You can also look forward to another milestone reward at 35%, and this one I've been saving up for a long time. It's a creation myth from the world of my prehistoric fantasy novel, Face of Glass (which supporters at the Collectable level and above will be receiving along with their other goodies). This myth is one I've never made available anywhere before, and though I think it'll be of particular interest to existing fans of Face of Glass, it should be an enjoyable read for anyone. If you're curious, you might like to take a look at Silent as Still Water, which takes place in the same setting.

All in all, there are some very good things coming up very soon, and if you can find anyone to join you in supporting Ten Little Astronauts, you'll be able to get hold of them significantly sooner.

Thanks again to everyone: you've already done so, so much.