Huge news! Ten Little Astronauts has reached 25% funding: one whole quarter of the way towards a super swanky trade paperback distributed by Penguin Random House, with even swankier first editions (among other things) going out to supporters. If you've already put in a pledge, you'll already have access to My Name Algernon: a work of interactive science fiction written for the very same MA course as Ten Little Astronauts (and with a similarly high academic mark). You'll also be able to listen to an audio recording of the first chapter, which was the 20% milestone reward. You can get hold of all these rewards even if you pledge after they're initially released. I'll be making new goodies available for supporters at regular intervals, so do keep an eye out!

Conveniently, Ten Little Astronauts is also approaching 125 supporters, and as I did when it reached 100, I'll be sending a signed paperback to somebody at random once we reach that milestone. At the time of writing, there are just ten places left before I pick a name out of the hat, so do stay up to date with your emails: it could be you! Since most of my work is available as part of the regular supporter rewards at some level or another, I'm planning to send out a copy of Kicking and Screaming, edited by A.T. Douglas. 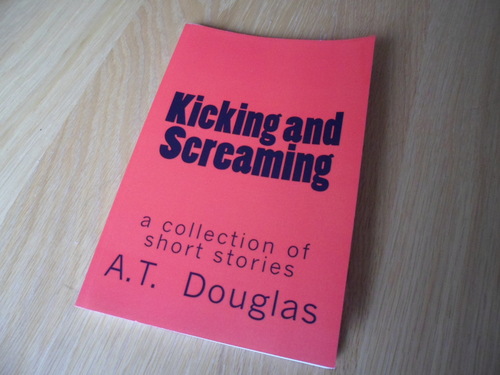 This book includes Harvest Moon, a story of mine that isn't currently available anywhere else, as well as the work of several of my own favourite authors. Each story was written with a particular prompt in mind - mine, for example, includes no adverbs ending in "-ly" - and I hope whoever gets this through their letterbox will enjoy them all. The proceeds from the book go to Heifer International and royalties from past copies have already helped get a llama to a family in need, so I'm confident it'll be a worthwhile prize overall.

If you're not that one lucky person who gets this book, however, don't be disappointed: I'll be sharing both the text and a never-before-heard audio recording of Harvest Moon as the 30% milestone reward for Ten Little Astronauts. The story is part folk tale, part horror, set in an extremely isolated marshland village. The closest thing I can compare it to is probably The Wicker Man, but the decent '70s one, not the Nicolas Cage not-the-bees-they're-in-my-eyes one. It's hardly an ideal comparison, though: all I can really suggest is to help Ten Little Astronauts to 30% and read/hear it for yourself!

Naturally I'll be doing everything I can to spread the word about Ten Little Astronauts and try to gather the funding to get your copy to you as soon as possible (as well as various other fun things along the way). The support behind the book already is huge - over 100 people and 25% of the way there - and I hope that'll help keep things moving along. If everybody who's already put in a pledge found just one friend willing to do the same, we would be literally halfway!

The closer Ten Little Astronauts gets to 30%, 50%, 70%, the easier it'll be to find supporters to take it the whole rest of the way. 25% is already a big step towards that, so a massive thanks to everybody already on board. I'm determined to make sure this book is the absolute best it can be.

I bought a copy of 'Kicking and Screaming' a few months ago, and I must say 'Harvest Moon' is definitely one of my top favourites from it.
One of... There's so many good little stories in there I could never actually pick just one! ;)

I'm sure whoever gets it will love it, and I'm looking forward to 30% to hear that recording!