It's a bit of a coin-flip as to whether this'll go out before or after Unbound closes up shop for the holidays (since these updates are approved manually), but I simply had to share it. Joe Wright just sent over this absolutely fantastic Ten Little Astronauts artwork, based on a scene from the novella that a very small handful of people will have heard me read at the International Agatha Christie Festival. 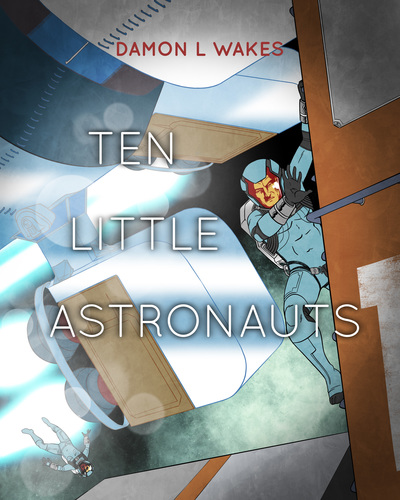 Chances are you'll have come across Joe Wright's work before, as he also produced the image I've been using in almost all my promotional materials for Girth Loinhammer's Most Exponential Adventure. This one's very different in terms of style, though:

I was trying to make something that was reminiscent of old sci-fi pulp novels, which I understand isn't exactly the aesthetic you're going for, but I think it'll help catch the eye.

It may not be a direct representation what's described in the book (in which the U.N. Owen is not much to look at), but for the overall tone I think this is a great match. The pulp style harks right back to the time of And Then There Were None, and the image itself certainly captures the tension at this point in the story. But to find out what's really going on here, you'll have to wait for the book!

If you'd like to see more of Joe's work, one handy place to look would be his profile on deviantART. He's a writer as well as an artist, and regularly takes part in the same Flash Fiction Month event as I do: you'll see his stories referenced in a number of my own, typically those written as part of a challenge involving another author's entries for the event.