Back when I first had to come up with a tagline for Ten Little Astronauts, to put on leaflets and such, I thought about what really set my book apart from the other sci-fi stories - and the other murder mysteries - out there. In the end, I settled on:

Partly that was because "X of this thing, Y of that thing, Z of some other thing" (where X, Y and Z are all numbers) is a pretty well established convention when it comes to this sort of slogan, and partly because I was reasonably certain none of those other slogans would involve a number as high as ten trillion.

Very few other sci-fi settings really get to grips with the truly mind-boggling distances involved in travelling between stars, or the time it would take to do that. Captain Kirk hops around at warp speed. The Milennium Falcon can travel through hyperspace. Even in Alien, a film that absolutely relies on the crew of its ship being utterly beyond reach of help, Ripley can hop into a shuttle with at least some hope of rescue. The sequel states outright how unlikely she was to be found, but given that she is found, the films skirt over the scale of the distances involved as much as they do highlight them.

There are only a couple of works I can think of that fully acknowledge just how big space is. One, weirdly, is sci-fi sitcom Red Dwarf. The crew might constantly be bumping into weird and hilarious alien species, but they've been travelling long enough that the Cat's entire species evolves while Lister is in suspended animation, and it's apparently uncertain whether or not it's even possible for the ship to return to Earth.

The other thing that manages to capture this sense of scale is Seedship. 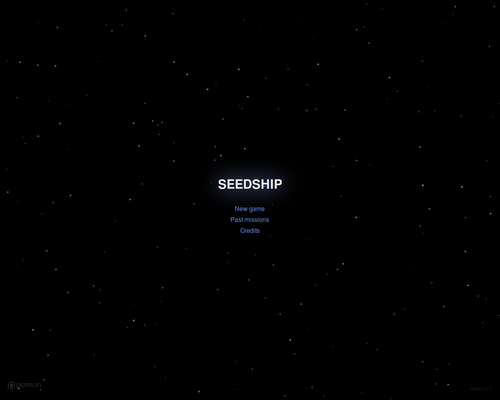 Seedship sees you take on the role of the AI controlling an interstellar colony ship much like the U.N. Owen of Ten Little Astronauts. The Earth is doomed, and so your job is to look after your cargo of frozen passengers as you drift from star to star, assessing the prospects of life on each planet you pass and hibernating for the vast stretches of time in between. The first time this happens, you wake to discover that everyone on Earth has died. This is inevitable. That first leg of the journey - like all the others - takes several hundred years.

The ship you control is incredibly durable, capable of operating for multiple milennia without being repaired or refuelled, yet simultaneously it is incredibly fragile, its systems gradually deteriorating due to interstellar radiation and micrometeorite strikes. Since such a journey has never been undertaken before, the AI learns a great deal during its travels and can occasionally upgrade its sensors to direct it towards only the most habitable worlds. However, the sensors themselves will inevitably become less reliable as the hazards of space take their toll.

It's possible to launch a surface probe to fill in any gaps left by malfunctioning sensors and to determine whether any anomalous features of a planet will be helpful or harmful to your colonists, but since you start with only a limited number of these probes this merely delays the inevitable. At some point you must decide that the planet you've reached is "good enough" and commit to settling on it with whatever resources you have left. 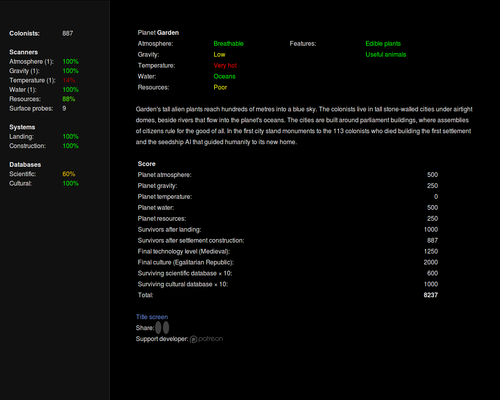 Luck plays a big part in Seedship, and I've seen my colonists develop utopian societies on lush, edenic worlds purely because the second or third planet I stumbled across happened to be absolutely ideal and the ship was still in perfect shape. However, this is extremely unlikely. Far more often, you're left with a dilemma: do you settle for a far from ideal world while you still have all your colonists and the resources necessary for them to establish themselves in that hostile environment, or do you resign yourself to sacrificing a certain number while you wait for a more habitable planet? It's possible to hold out for a very long time indeed waiting for that perfect world, but if a barely-functioning landing system means your ship breaks upon arrival and the survivors are sent back to the stone age, you would almost certainly have been better off settling for a less hospitable world several thousand years earlier.

Fundamentally, the choices you're offered in Seedship are very simple and I think that's partly what makes them so effective. The stories generated by those choices can be quite complex, but as the player you're mostly just offered "this thing" or "some other unknown thing," and it's the cumulative effect of those decisions that determines everything that happens in the end.

Seedship was written by John Ayliff (who also has a Patreon if you'd like to support his work) using Twine, the same tool I've used to produce almost all my own interactive fiction (including Girth Loinhammer's Most Exponential Adventure, soon to be published by Aperture Editions). It'll likely be quite an inspiration as I work on the interactive sci-fi story for the first 150 supporters of Ten Little Astronauts, though I'm aiming for something considerably more lighthearted. Still, I think the basic structure of this game could make for a very promising starting point. I'd certainly like to have the basic building blocks of the story be random or stat-based, rather than the sort of standard branching path you see in works such as the Fighting Fantasy gamebooks (though those have always been quite an inspiration too).

If you've got any thoughts on this, I'd love to hear them. Ten Little Astronauts is very close to 150 supporters now, and I'll be making a start on that interactive piece as soon as it gets there. This is your chance to have a say on what you'd like to see in it. Heart-wrenching moral choices? Big freakin' lasers? A breakdancing rancor in a tutu?

Also, if you'd like to see any of your friends' names in there, do encourage them to put in a pledge.