See me at the International Agatha Christie Festival

Some exciting news: I've been invited to talk about Ten Little Astronauts as part of a Platform at the International Agatha Christie Festival this year! The event will take place at 6pm on the 14th of September in the Spanish Barn at Torre Abbey: the same place (and almost the same day) that I heard Sophie Hannah talk about her latest Poirot mystery, The Monogram Murders, last year at the Agatha Christie Birthday Celebrations. 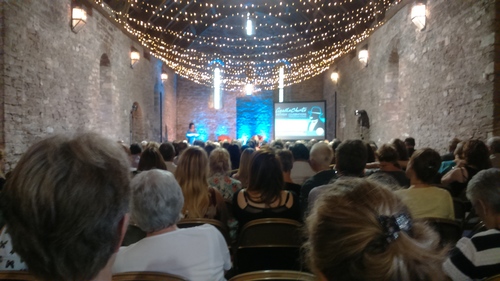 The festival is a mammoth five-day event (though there are a range of tickets so you can pick and choose which days you want to attend) and there's a lot going on. My talk will cover the idea behind Ten Little Astronauts, the challenges of writing a murder mystery set in interstellar space, and the process of taking it towards publication. I'll also likely be reading a couple of sections that won't have been heard before, so even if you've picked up much of the story behind the book through these Unbound updates, there's likely to be something new to everyone.

If you're a supporter of Ten Little Astronauts and planning to head to the festival, please do say hi! I'm hopeful at least a few people will be there given that there are now nearly 200 of you altogether and I expect a fair few are Christie fans. The easiest way to reach me when I'm out and about is probably through Twitter.

If you're coming at this from the other direction - someone who heard about my work through the festival - then welcome! You might like to have a look at the book page for Ten Little Astronauts, which includes a video filmed on board HMS Alliance at the Royal Navy Submarine Museum (where I conducted much of my research), as well as an excerpt from the book itself.

If you like the idea of my novella - a hard sci-fi reimagining of Christie's classic And Then There Were None - then please consider putting in a pledge. You'll get a copy for yourself (and a selection of other rewards), but more than that you'll be helping the book make it into print. If Ten Little Astronauts is fully funded, it'll be distributed to bookshops through Penguin Random House and your name will appear in the back of every edition in recognition of your support.