HWS Gala Evening and Winchester Writers' Festival (and Some Swag)

There a couple of big events coming up in Winchester this month, so if you're in the area I really recommend dropping by! The first is the Hampshire Writers' Society Gala Evening, where I'll be setting up as part of their Members' Book Fair. It's free to come along, and if you do you'll also get a chance to hear talks by Guardian journalist Erwin James and novelist Claire Fuller whose debut book, Our Endless Numbered Days, was written for the same MA course as Ten Little Astronauts.

This is the third time the book fair has been running - I've made it to every single one so far - and it's been a consistently excellent event. I always make an effort to come prepared, but this time I've really gone all-out. The shirt design I shared in my last update has now been printed and delivered, and I've also got a poster and some swag: badges! 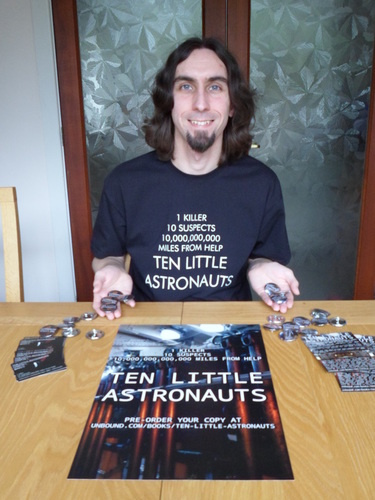 I mentioned in my last update that I might be adding some swag to the supporter rewards, and noticed that Kim Howard commented to ask if the shirt would be part of that. The answer is: I'm not currently planning to include shirts as a pledge reward, but it's certainly an option! If anybody would like one, let me know and I'll see if I can sort something out.

To answer your other question: yes, a book group pledge would be a good idea. I had originally planned for the Dedicated Author Workshop option to fill that niche - if anybody goes for that one, I'll run a workshop at their choice of location anywhere in the UK - but I think it would be good to offer an option that includes a bundle of books and either a visit or a Skype chat depending on where the group is. If it's local anyway then naturally I'd be happy to drop in. 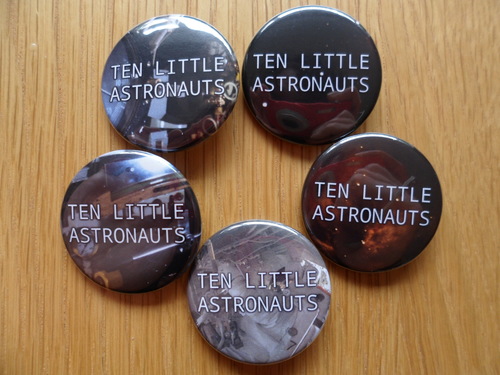 Back to the badges: there are five different designs. Two feature Stephen Craig's astronomical photography, two my own photographs from HMS Alliance, and one a real live astronaut (Soichi Noguchi, I believe) just outside Space Shuttle Discovery.

I'll have the whole bunch of badges on hand at the HWS Gala Evening, 6pm on the 13th of June in the Stripe Building of the University of Winchester. I'll also likely be bringing a small selection to the Poetry Platform at the Railway Inn, 8:30pm on Tuesday 6th. Come along to that and you'll also get to hear a section of my SUPER SECRET NEXT BOOK that I'll be announcing shortly (though if you've subscribed to my newsletter, you'll already know what it is). 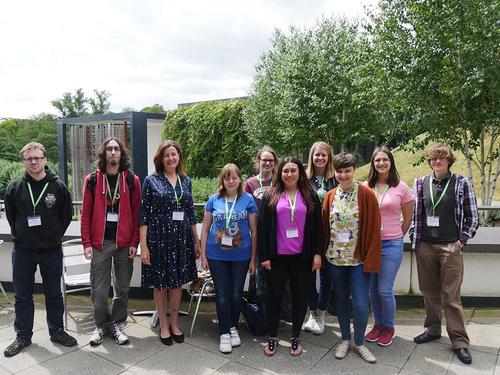 The other big event is the Winchester Writers' Festival (June 16th-18th), which is the very same event where Ten Little Astronauts was picked up by Unbound last year (the photo above is actually from 2015, when I won a scholarship allowing me to attend the whole three days). If you haven't already got a ticket, it's probably a little late (though not necessarily impossible) to do that. However, all the Friday evening activities are free and open to the public! I'll definitely be attending the launch of the 2017 Litmus anthology, as well as the open mic. The free events are among the best the festival has to offer, so don't pass up the opportunity to come along and give it a go! I'll be around Saturday and Sunday as well if you're there for the rest.

Those are the next few places to drop by and say hi if you're in the area, but don't worry if you're miles away: there'll be no shortage of interesting stuff going on online as well! Harvest Moon will be going out to all supporters very soon - the audio has been put together by Sharon Vennall, and it's absolutely top notch - and we're incredibly close to reaching 150 supporters altogether. Right now the total stands at 143 (and do bear in mind that under Unbound's old counting system, that would already be 149), so there are only a handful of slots left for the next reward. This'll be an interactive sci-fi story, written using much the same software as My Name Algernon and featuring the names of the first 150 supporters as characters.

If you'd like to see Ten Little Astronauts funded (and, if you're quick, get your friends' names in that 150 supporter story), do share this around! The number of people behind Ten Little Astronauts has gone from reassuringly large to downright enormous, so if everybody who's supported the book so far found just one more person to put in a pledge, we'd be way beyond halfway. If everybody found two people, we'd basically be there!