On Thursday I got up at 6 and hopped on a four-hour train to Torquay. The reason? Agatha Christie's birthday celebrations! Also, the event marked 100 years since the creation of (perhaps) her most famous character, Hercule Poirot. 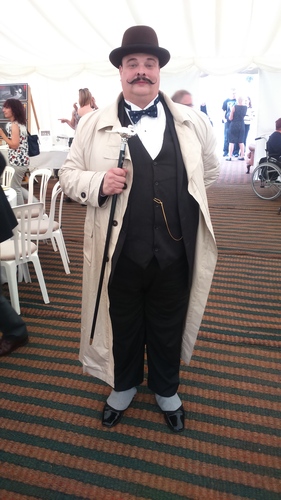 There were a fair few Poirots at the festival itself, which reminded me somewhat uncomfortably of Stevyn Colgan's A Murder To Die For, in which a murder takes place at just such an event and the mystery fans present (most of them dressed as fictional detective Miss Cutter) take it upon themselves to solve it. It was during the cream tea at the end of my visit that I realised that the opening chapter of that book had left enough of an impression on me that I should probably go ahead and pledge to support it. If anybody else would care to do the same (the book sounds very, very funny) then you might see me at the launch party. 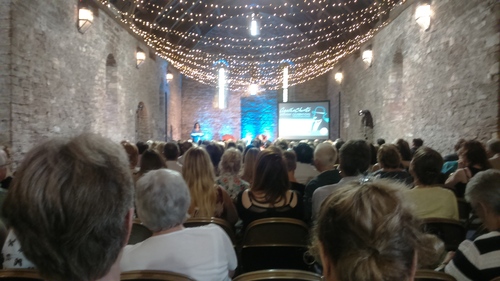 The speakers at the event were very interesting indeed. First, Mathew Prichard - Agatha Christie's grandson - read Witness for the Prosecution. Having only got into Christie's work through the MA course that led to Ten Little Astronauts, this one was new to me. It's a short story, and I was very impressed by how much of a mystery she managed to pack into comparatively few words.

After that, Sophie Hannah spoke about her new book, Closed Casket, which just made the top ten in the Sunday Times bestseller list this weekend! I was especially interested to hear her speak, as she's writing new Poirot mysteries: I took the opportunity to get a signed copy of her first, The Monogram Murders, while I was there. It struck me that we had written the same sort of book in very different ways: I'd built my story around one of Christie's mysteries while she'd built hers around Christie's characters. This talk was a huge part of the reason why I decided to make the trip at such short notice, and it didn't disappoint.

Though it was a fairly short visit for such a long train journey, it was absolutely packed while I was there and I think there were only a few occasions when I wasn't talking to someone or other. If you saw me there, do let me know! It would be great to get in touch. It's not the sort of event I would have even thought about attending a year ago, but having been, I'm already planning to make the trip again next time around!