You might be aware - perhaps through My Name Algernon or my work on Craft Keep VR - that I produce games and interactive fiction as well as books. If you've been following since November, you'll probaby have come across Girth Loinhammer's Most Exponential Adventure: the massively interactive fantasy parody that I’ve been working on for the past year and a half. Well, there's recently been some big news: I've signed a contract with Aperture Editions, who intend to publish it as an illustrated gamebook in both English and Spanish. 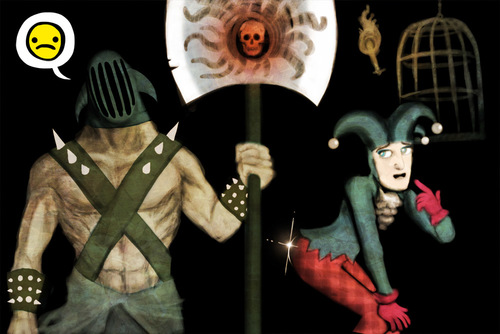 I’d been considering turning Exponential Adventure into a book myself, but the sheer scale of the work made it a daunting prospect. Because the interactive elements only rely on hyperlinks – there are no stats or states to keep track of – it would be possible to convert it into a paperback using instructions such as “To grind two lemon halves into your eyes, turn to passage 803.” However, the number of linked passages would make that extremely difficult and the finished book would be truly enormous. Even converting the HTML Twine story into a properly formatted ebook would be quite a challenge for me.

That’s where Aperture Editions comes in. They’re a brand new publisher based in Spain and focused specifically on interactive fiction. There are a couple of reasons I’m really glad to have them behind this particular project. One is the Spanish language edition, which I think is immensely cool. The other is that they intend to illustrate it and generally have the sort of design know-how that I don’t. The book they produce will be far, far better than the one I originally had in mind back in November 2015.

Over the next six months (in addition to crowdfunding Ten Little Astronauts) I’ll be working to finish and polish up Girth Loinhammer’s Most Exponential Adventure to the absolute best standard I can. After that, it’ll be in the hands of Aperture Editions and hopefully available to you within another six months, so about a year in total. In the meantime, your best chance to get a glimpse of the full book is to turn up to one of the Winchester open mic nights where I’ll be reading it live: typically either Poetry Platform at The Railway Inn or PopUp Acoustic at The Willow Tree. If Southampton is easier for you, I also read at Moving Voices at The Art House. The Willow Tree is by far your best bet, though, as I find the Loinhammer Saga gets an especially good response there: I suspect it has something to do with that particular event’s proximity to the bar itself. The formula could probably be expressed as:

If you’re not near Winchester, it’s possible I’ll also be looking for a small number of advance readers to explore the story and offer feedback. You wouldn’t be obliged to proofread the thing, and actually I’d prefer to hear first impressions rather than thoughts on the book in its entirety (though both would be welcome). I’m not certain how many of these advance readers there will be or how I’ll select them, but I’m considering putting the option out to supporters of Ten Little Astronauts first as there’s a big enough pool of readers at this point and I’d like to reward you for investing in my work. There's no need to put your name down for that yet - I'll post another update once I'm in a position to send the book out - but do leave a comment below if it's something you'd be interested in doing and I'll keep you in mind.

In the meantime, don't forget about the reward I'll be putting together once Ten Little Astronauts reaches 150 supporters: an interactive sci-fi story featuring the names of those first 150 people as characters. Right now there are just five slots left and if previous rewards are anything to go by those could go very quickly indeed. If you have a friend you'd like to see get a mention in there, now's the time to get them on board!