This is the last chance to tell your friends about Ten Little Astronauts. The book is about two thirds of the way towards its original target, which means it's got a good chance of getting there if there's enough interest in these final few days, but even if it doesn't quite get there it will at least make it into print. 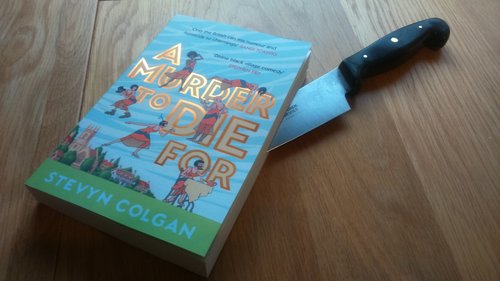 Mentioned in the video above, alongside James Ellis' The Wrong Story, Stevyn Colgan's A Murder to Die For is a pretty good example of the kind of little extras the paperback of Ten Little Astronauts is likely to include if it reaches its original target before Christmas. Stevyn recently posted an update comparing the subscriber special edition to the trade paperbacks, and it's really interesting reading. The copper foil on the title here, for example, is one of the options that would be opened up for Ten Little Astronauts by reaching 100% (in addition to the considerable bonus of being distributed to bookshops by Penguin Random House).

It's tough to say whether or not the book will hit that target: having already gained the bulk of the funding needed, all it would take would be one final burst of interest to see it reach its original goal, and I really hope we can make that happen. Even if that doesn't work out, though, the level of support behind Ten Little Astronauts has already been phenomenal. The people who've come together to make this book a reality now number well over 200 - more than many other Unbound books already out there - and every single one has had a hand in its success.

It's possible there'll be another update soon (especially as we're currently just a hair away from the 225 supporter book draw), but if everyone is out of the Unbound office by then you might not get that for a while. So since I'm already writing this, I figure I may as well take the opportunity to wish you all a Merry Christmas, a Happy Hanukkah, and/or generally good times all round.