I mentioned in my last update that there was a possibility I'd be able to add some extra content to Ten Little Astronauts, and for the last little while that's what I've been working on. I'm currently rewriting a substantial short story that I think will complement the novella itself. Here's a snippet of what I've got so far: 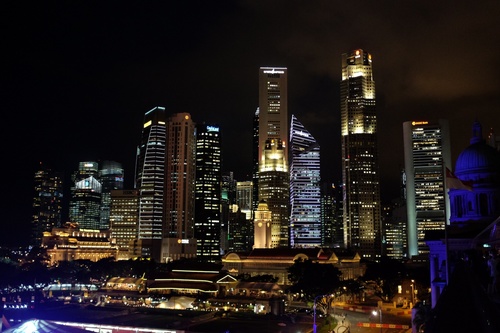 The man lifts the sieve from the machine – hand wrapped in a threadbare towel – and dumps the noodles in a blue plastic bowl.

I press my thumb to the reader and he passes me the noodles.

It’s nearly five a.m. and all the seats are taken. I join a group standing beneath the tarpaulins stretched between the streetlamps, listening to the rain pounding the PVC and trying not to let the drips fall in my food.

Outside, a constable trudges pointlessly across the empty square, his gloves duct-taped to his sleeves. He catches me staring and he nods. I can’t tell who it is past the mask and goggles, but I nod back anyway.

As you can probably imagine, this piece isn't set in the same world as Ten Little Astronauts. One of the things that's always appealed to me about science fiction is that the setting can be adapted to suit the story, so while the events of Astronauts take place on board a comparatively low-tech ship drifting through interstellar space, this one is set on a dystopian Earth where new scientific advances have had an irreversible impact on society.

Despite their differences, the two stories have a few common threads that I think will mean they work well when read together. They each revolve around a mystery for one thing, and there are some other similarities between the two (but getting into those here would risk spoiling both).

I'm also still hoping to include a slightly less academic version of the essay I wrote back when Astronauts was my MA final project, but at this stage it all depends what there's room for and what Unbound is happy to include. Everyone who's pledged for this book or even just helped spread the word has made a massive contribution to its success, so I'm keen to keep you all up to date with how it's going. Hopefully this gives you some idea what I've been working on for the last little while, and what you can expect once the book finally comes through your inbox and/or letterbox!

Reminds me of Blade Runner...