You should by now have got an email from Unbound letting you know that things are moving along with Ten Little Astronauts and that it's been reviewed for a developmental edit. Well, I'm happy to say that we've already made progress with that! I've been working with Scott Pack - the guy who first took an interest in the book back at the Winchester Writers' Festival - to improve the story.

There actually wasn't all that much to edit - no scenes/chapters to add or cut, no characters to rewrite, no plot holes to fill - which I attribute partly to the vast amount of editing I did before submitting the book as my MA final project, and partly to the fact that it's a murder mystery. It would be extremely difficult to cut any given scene without removing a vital clue, and extremely difficult to add a new one without having it prove inconsequential to the plot. Most of Scott's notes boiled down to "Hang on, why is this significant?", and in hindsight (it having been quite a while since I originally wrote the book) those bits do benefit from a little clarification. 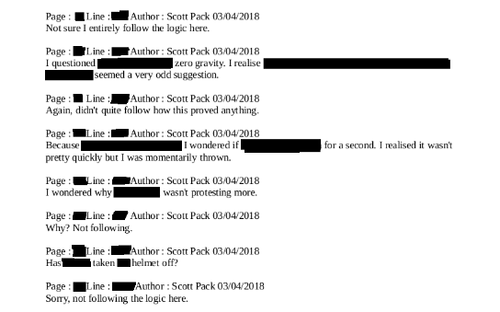 This is far from the end of the editing process - it's all broad strokes "What information does the reader need here?" stuff at this stage - but it looks as though it shouldn't take too long to edit the text itself either.

One other thing that's come up is that since Ten Little Astronauts is fairly short, there's apparently an opportunity to add some extra content to the book! The first thing that sprang to mind when I heard about this was the essay I submitted along with the novella (which I'd most likely rework into something a little less academic), but that's just one idea. Short stories might also be an option, and I'm starting to wonder if it might be possible to find somebody to draw up a basic map of the ship or schematics of the equipment on board.

Is there anything you'd especially like to see included in the book as well as the novella itself? If so, leave a comment and let me know!