Possibly the most important update yet! Unbound would like to move Ten Little Astronauts over to a new paperback list with a lower funding target, but if you'd like to see the version with all the bells and whistles that were originally planned, you've got until Christmas to make it happen. 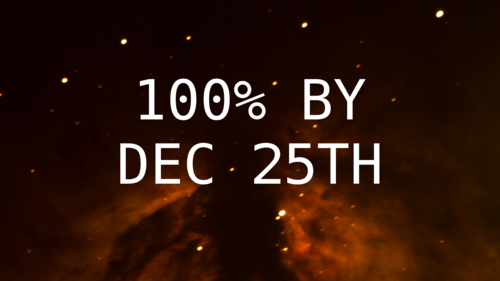 With the massive level of support already behind the book, it's entirely possible to reach 100% by then, but it's up to you to spread the word, recommend it to your friends, and generally make sure as many people as possible know about it. If you fancy a few extra rewards and would like to upgrade your pledge, that would also make an enormous difference.

Whether or not we reach this target is all down to you. We're almost halfway already, and if I just kept doing what I've been doing so far, I'm certain Ten Little Astronauts would get there in the end. However, I don't want to keep people waiting that long. If we can't reach the original target by Christmas, that new paperback list at least means that everyone will still get their book in good time. However, I'm confident that we can reach that original target. If everyone who's supported the book already gives it just a little extra push, we'll be there in no time.

I'm counting on you: let's make this happen!