Ten Little Astronauts is very near 25% now, and when we hit that milestone I'm planning a little something special just for supporters of the book: My Name Algernon, a work of interactive science fiction.

In some ways, this is kind of an obvious tie-in to Ten Little Astronauts itself. Both are sci-fi, both got top marks on the same MA course, and both are based on well-known works by other authors (Ten Little Astronauts on And Then There Were None, My Name Algernon on Flowers for Algernon). However, being interactive it also brings in a whole new format of writing that I think people might be interested in for its own reasons.

For quite a while now, I've been producing work using software called Twine. Some are very clearly stories, while others lean more towards being simple videogames or even elaborate practical jokes (long-term followers will probably be suspicious of anything I make available on April 1st). I'm proficient enough that at this point that I can work up to and even push the limits of Twine itself, but what I've found really rewarding are the opportunities to put what I've learned about interactive fiction towards projects with other people. That's why this weekend I hopped on a train over to Brighton to take part in Global Game Jam 2017. 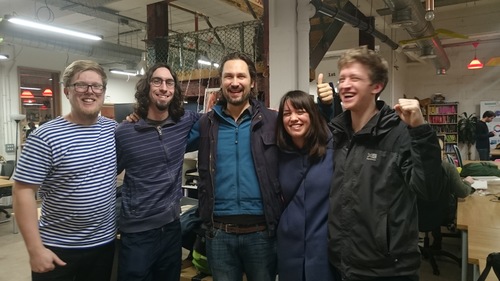 As part of the team in this very photo, I helped create Undercurrent: an interactive fiction piece featuring Mexican wave game mechanics. The Game Jam is only 48 hours long, and though we had a pretty solid foundation laid down by Sunday afternoon (which you'll see in the video above) we didn't quite get the whole thing together for the presentations at the end. However, in the final four hours I did manage to cludge together an online-playable version using good old Twine! If you'd like you can give it a go right here in your browser.

Hopefully this will give some idea how Undercurrent would ultimately work, as well as illustrating some of what my writing contributes to beyond my own books. If you're a particularly keen gamer (ie. keen enough to own a virtual reality headset and motion controllers), you might also like to take a look at Craft Keep VR, which is my main job at the moment. The game places you in the role of an artisan merchant, crafting weapons and potions for various fantastical heroes. I tried an early version of it myself at EXG last year, and it's very good fun indeed.

My Name Algernon, as you might expect, will be more of an engaging story than a fun game - there are no dragons or Mexican waves, at least - but I hope you'll enjoy it nonetheless. At the time of writing there's less than 1% funding to go until I send it out, so just a couple of people inviting friends to pledge may be all it takes to push the project that little bit further. Sharing on Facebook and/or Twitter makes all the difference too.

I'm also planning to run another paperback giveaway when Ten Little Astronauts reaches 125 supporters, and that's creeping up pretty quickly: we're on 111 right now. That means there are 14 more chances to get the next signed book on offer (I'll be announcing the title shortly). Supporter #126 will get another shot when we hit 150, but by then the first 100 supporters will have had their names in the hat three times by that point and I've already given away the first ever copy of Robocopout in existence so there's something to be said for getting on board early. Friends don't let friends miss out on free books!