5 Weeks Left! Get an Early Look at Exponential Adventure

There are now just five weeks left until Ten Little Astronauts' Christmas funding deadline, and unfortanately we're still at 50%. At this point whether or not the book reaches 100% is ultimately down to you. There isn't long enough left for me to find those readers on my own, but if everybody who's supported the book so far can encourage just one more person to do the same, we'll be there in no time at all!

Part of the reason things haven't moved as quickly as I would have liked over the past week is that I've been rather preoccupied with my other big project, Girth Loinhammer's Most Exponential Adventure. For those who haven't heard of this before, it's an interactive story - much like the classic Fighting Fantasy or Choose Your Own Adventure books that were so popular in the '80s - but instead of offering a largely linear story for readers to explore, the plot branches exponentially. Each choice you make leads to two totally unique choices, each of which lead you to two more, and so on until you come to one of 512 equally unique endings. This thing is almost unfathomably vast, and I've recently been exhibiting it at games events where it's gone down very well indeed. 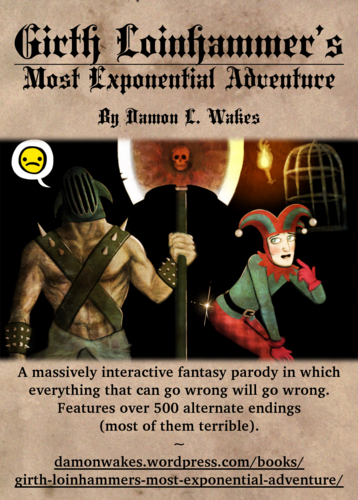 The thing is, Exponential Adventure is so huge - containing two novels' worth of text - that it's virtually impossible for any one person to explore a significant proportion of it in the space of one event. A single story can be read in less than ten minutes, but there are 512 of those stories to be discovered. Just last weekend at AdventureX, an entire conference of adventure games enthusiasts clicked through it for a full two days...and collectively discovered a smidge more than 20% of the content available. In order to gain more feedback on the story - and as an additional reward for anyone who's supported Ten Little Astronauts - I'd like to offer the opportunity for a certain number of people to read through in their own time.

I think it's important to stress that I don't expect people to read all of it, hunt for typos in what they do read, or even necessarily to put any serious effort into exploring it at all. If you read it once and find that you don't have any inclination to have another go, that's more use to me than if you power on longer than you feel like. If you do find that the nature of the thing compels you to hunt out every available storyline, I'd like to know that too. However many storylines you discover, I'd be curious to learn if you tend to take a different route every time, or if you prefer to see the full range of endings that lead on from a few early choices.

So, if you fancy an early look at Girth Loinhammer's Most Exponential Adventure, here's what you need to know:

That's about it, really! I'm currently working on the very last handful of endings for Exponential Adventure, and hoping to have it finished by the time I take it to Reading Comic Con at the weekend. If all goes to plan, I should be able to send it out to supporters this time next week, so if you let me know before then you'll be among the very first people to ever have access to the finished thing!