This update is a little late because I was in London for the Brixton BookJam. Fellow Unbounder Zelda Rhiando (author of Fukushima Dreams) very kindly made the audio of the event available online, so I've attached my section to this very update. Hit the "P" button in the grey box above (immediately below the title and date) to have a listen! I was reading the same excerpt that I recorded as the 20% milestone reward, but this time around it was live in front of an audience.

The really big news this week is that the article that originally appeared in the Eastleigh Times made it into the Southern Daily Echo! This is a much bigger paper with a far wider distribution, so should really do a lot to help draw people's attention to Ten Little Astronauts. 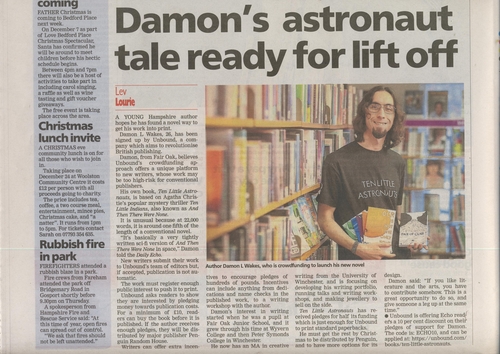 I've already had a couple of people recognise me from this, which is quite a novelty. The article is also available online this time around, so if you'd care to share it around at all, that would do wonders for getting the book in front of people. I think Lev Lourie did a fantastic job of explaining how Unbound works in general, so pointing anyone you think might be interested towards her article would be a handy way of introducing them to Ten Little Astronauts.

I also managed to get an article in the Star & Crescent during the week. This one I wrote myself: it covers a little of the history behind Ten Little Astronauts, both in terms of the book's journey from academic project to prospective paperback and the Agatha Christie works that inspired it.

Finally, having opened up the option for supporters to get an early look at Girth Loinhammer's Most Exponential Adventure, I think it's worth mentioning that the story is now finished. It ultimately took 25 months to write, and ended up being 181,000 words in total, though due to the exponentially branching structure it can be read beginning to end in roughly ten minutes. Quite a few people have already expressed an interest in becoming test readers, and they've all got their copies by now. If you'd like to join them, simply get in touch through the form on my website and let me know.

That's it for now. As always, please share with your friends and - ideally, if at all possible - see if you can find someone to join you in supporting the book. We're now more than halfway to 100%, and though time is short the overwhelming support behind the book already means that we've got every chance of reaching that goal. If even half the people already supporting Ten Little Astronauts found a friend to do the same, we'd be almost certain to get there in the end!