The final ascent is upon us. The path feels steep, but the beautiful granite peaks are in sight, all rimmed with snow and cloud. We are getting so close! And oh, what a delight it will be to reach the summit and to sit down with a long, big cup of tea. And oh, how I wish I could share that cup with all of you!

In the meanwhile, there are a few very special pledge-levels with only a handful of offerings left, all of which you can upgrade to if you so desire, by emailing hello@unbound.co.uk and telling them what you'd like to upgrade to.

There is the £80 Wild Tales by Mail level: for those of you curious about some of my other work (fairytales rewilded and sent out in the mail with a wax seal), this level includes three of my Gray Fox Epistles (of your choice!) as well as a book. There are only three remaining Tatterdemalion Artwork levels, which include the hardback book & a beautiful A4 print from the novel, signed by Rima. Or, if you are so bold as to perhaps desire both of these things together, there is ONE REMAINING Wild Tales & Artwork Bundle (three of my Gray Fox Epistles, a signed A4 print from the book, and a signed hardback edition). 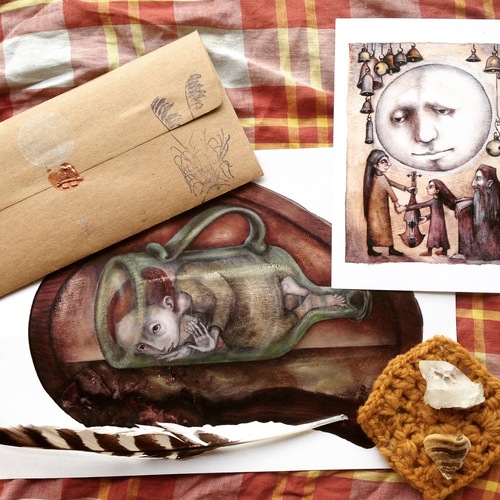 And then, for those of you who live in California, there are only a few places left in my Wild Story Workshop, which will take place in the Point Reyes National Seashore at a date and time agreed upon by all participants. This will be a truly delicious day spent out on the land learning to read the language of animal tracks and sign (bobcat, river otter, coyote, heron, to name a few), and exploring our own myth-making imaginations through writing exercises and storytelling. I am quite excited to be offering this exclusive, day long dive into myth and the more-than-human world, so if you feel called to upgrade to this level, I would love to have you there.

(There is also of course the beautiful leather bound which I mentioned in the last Shed post!) 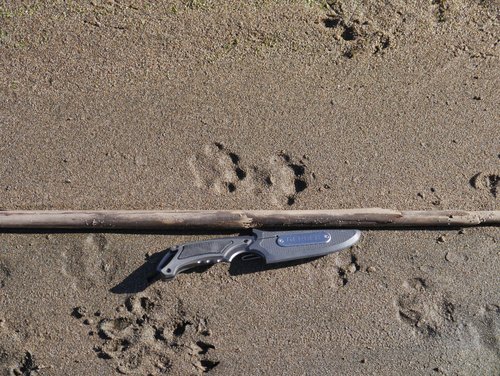 To spur us on for the last leg, and with much, much gratitude to all of you, I am excited to share a brand new, never-before-seen little excerpt from Tatterdemalion, part of the story of St. Margaret, Little Owl, accompanied by Rima's Slova Sova. 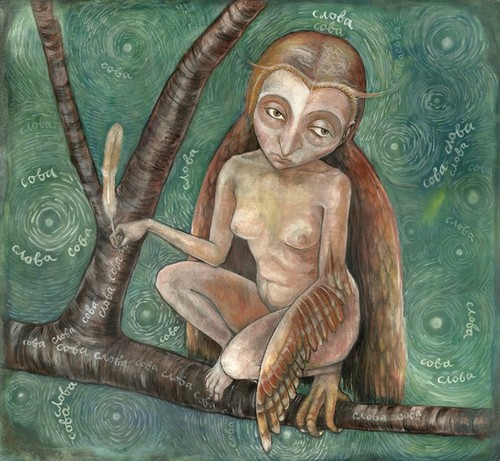 It is said that the sound of her wing beats is full of sorrow even as they press the wind and find within it stars. It is said that she is the dream and the grief of a woman some called a saint, a woman who poured water into bowls at night and set them at her windowsill to catch the dark and the moon’s face, handsome as a man’s. By day, she caught the green opening of leaves, the way they grow from nothing into spires of light, a green alchemy.

It is said that an owl came to that bowl of water as she sat in her Cloister at the End of the World. A barn owl, the common kind, who had just eaten a mouse and had blood on the white blade of her beak. That owl landed. She drank delicately through the blade of her blood-streaked beak from that bowl where the moon and the night and the stars rested like fish. It was a cold night, ice on the tiles of the abbey roof, ice on the branches that were still bare of their green, ice on the moon and the stars in her bowl, and the woman who some call a saint looked up as that beak dipped to drink. It felt like a thorn in her heart, it is said, that beak and those eyes so long and black that she finally found she could see the night for what it truly was—an owl, hunting the shadows of earth for the heartbeats of the furred, all blood and warmth in their nests.

It is said the bowl of water was really her soul. It is said she was saint because she lived in the abbey in a Cloister at the End of the World, and the Fathers there spoke of God, but it is also said she was a witch, with her heart in a metal bowl of rainwater, reading the night as the city smoked and the gutters cried out poison, as they cried out sorrow.

They say that she began to grow feathers from her forearms at that moment, and each one grew sharp and soft as her sorrow under the dark eyes of a barn owl who knew the night and herself more fully than any of us ever know ourselves.

Hi! Looking forward to the book, it looks beautiful x
I've pledged for the Wild Tales and Artwork bundle and am confused. I assumed there must be more than 3 Wild Tales included. I'm paying more to buy the bundle rather than buying them separately and only getting one book.
Trying to work out whether to change my pledge or if I have misunderstood... Please help!
All good wishes,
Anna

Yes, this must have been an oversight on our behalf! Thanks for pointing it out. Make that 4 Epistles instead of 3. Their value is $10 each so this is a little discount. Will have Unbound change the wording tomorrow, but not to worry about your order.

Hi Sylvia,
Thanks for the reply and adding the extra epistle. I'm still technically 'losing out' though as I'm only getting one signed copy of the book rather than 2 if I bought them separately. Don't want to be awkward or negative as I fully support the book and am looking forward to it!! Is it possible to buy more of the epistles? I like the look of them too x
Thanks
Anna x

Anna, I'm sorry I didn't understand this the first time-- there are a lot of pledge levels and a lot going on at the moment so I missed this detail. Of course you are right though about the 2 books vs. 1. It does make more sense financially to get the two things separately than as a bundle at the moment. What should we do? Would you prefer to be getting two signed books, or more Epistles? I'm happy to make it 6 Epistles total if that's what you would like. Let us know how we can accommodate.

Hi Sylvia! Thanks for replying, it was hard trying to explain what I meant. I would love 6 Epistles! They look amazing. Is it possible to buy more of the Epistles or is there limited stock? I missed them when they were released.
Congratulations on being fully funded! I'm so looking forward to the book!
Anna x

Okay, that sounds good Anna-- I have spoken to Unbound and they will modify the pledge level again. As for other Epistles, my shop is currently closed. If you are on my email newsletter list then you will receive a notification when I am open again; it will probably be for a short window. My newsletter is here in case you aren't signed up https://tinyletter.com/WildTalewort
Thank you for your kind congratulations!
x Sylvia

Thank you Sylvia, I will sign up to your newsletter xx