TESTING THE WATER, SPREADING THE WORD & ANOTHER BIG THANK YOU!

Tango is certainly extending its reach. I recently stumbled across this news item on an 'inclusive milonga' in Buenos Aires which makes quite inspiring viewing - 'magico' is the participants' verdict. And I was heartened to read in a link sent by a friend yesterday that word has also spread to Salon Canning, the first milonga I attended in Buenos Aires back in 2008. From 5th April, every Friday at 4:00 p.m. Tango & Parkinson's will have a regular slot under the Milonga Parakultural banner.

I'm delighted too that the benefits of dance generally are becoming more firmly established. Health Secretary Matt Hancock's commitment to 'social prescribing' includes plans for a National Academy and the recruitment of 1,000 non-medical professionals to enable activities such as dance to be made more widely available. Next week I am excited to be attending a one-day interactive symposium 'Looking Ahead: Dance for People LIving with Parkinson's' presented by Dance for PD/Mark Morris Dance Group, the Dance for Parkinson's Partnership UK at People Dancing, Dance Consortium and Sadler's Wells. This will be followed by an evening event led by Daniele Teale Dance in partnership with the National Hospital for Neurology and Neurosurgery, 'Dancing with Parkinson's: an Inquisitive Approach'. The symposium is one of a series of events offered to kick off the wonderful Mark Morris Dance Group's seven-week UK tour of Pepperland which will include Dance for Parkinson's-related activities throughout the country. (I'm also very excited to have tickets for their opening  night at Sadler's Wells.)

Closer to home, there are still one or two promises outstanding from last summer's auction - do chase these up with your promise provider/bidder when you can. And very many thanks to all supporters for your patience! I'm aware that, especially if you were one of the first subscribers, it must seem an age since you pledged your support. Please don't lose heart! Just to remind you that, once a book is successfully funded, Unbound reverts to the role of a standard publisher. So, unlike Amazon print-on-demand and so on, it's not a question of just printing. Now that the development edit is complete and, according to Unbound's in-house editor, the book is 'in great shape', next is copy editing. Apparently we're still on schedule for the book to be in the shops by the start of next year and with subscribers 'sometime before that' so watch this space. Meanwhile, a friend suggested this morning that it might be time to think about a Spanish translation. Offers, anyone?! 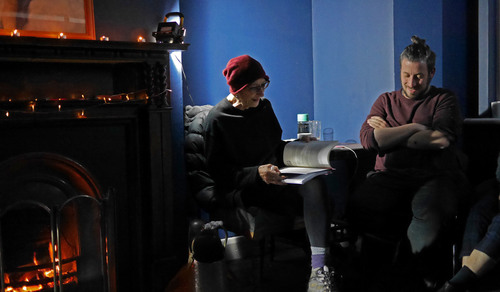 Finally, a big thank you to everyone who shared in the evening of readings at Othersyde/the Engineer's House last week. Although I've written and spoken extensively about Parkinson's & the Tango Effect over the last year or so, this was my first opportunity to test the water by actually reading from the book. Most of the audience had no direct connection with tango or Parkinson's.and although I've always felt that the book would appeal to a wide range of readers, I was curious, and rather nervous, to see how it would be received. I needn't have worried: feedback at the event and afterwards was very positive, so thanks to Clare, James & Matthew for organising and to all those who listened and responded so enthusiastically.