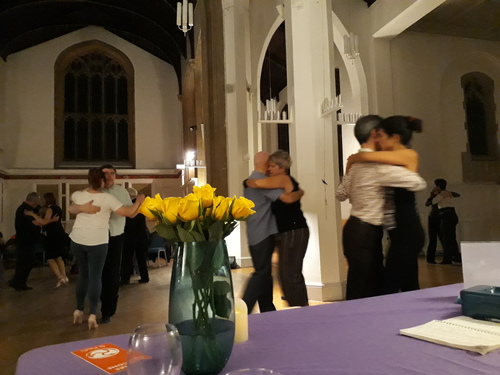 LAST NIGHT at our weekly milonga at St Paul's I found myself, as often recently, answering the question 'What's happening with the book?' and thought it's about time I brought you up to date. Incredibly, it seems that four months have gone by since the last update. I'm so sorry for my silence and for leaving you in the dark for so long.

The good news is that the production process is running according to plan, with a projected publication date for The Tango Effect of 2nd April 2020. I received the first typeset proofs in August and returned the corrections to the publishers in September, with the final  permissions for quotations in hand and the last queries sorted out and back to the setters by the end of October, ready for the next round of proofs. A late addition to the text is the lovely poem 'Tremulous', written for me by poet and tanguero Ray Harper some years ago. I'm afraid I'd forgotten all about it until I came upon it in an early draft. Fortunately my discovery was made just in time for it to be included before the book goes to press.

Meanwhile I have been approached by the organisers of Lichfield Literature 2020 to take part in an 'In Conversation' event on Thursday 26th March. The theme of their festival is books inspired by other art forms so The Tango Effect fits the bill neatly. If you are in the area, it would be lovely to see a friendly face in the audience!

Other new contacts include Issa Perillo, a dancer diagnosed with early onset Parkinson’s in 2011. With movement specialist Gloria Araya, Issa now teaches regular adapted tango classes for people with Parkinson’s in Chicago (you can check out her website here). We have spoken on Skype comparing our experiences and I hope we will stay in touch. I was also approached by Dr. Ninah Beliavsky, Associate Professor of Languages and Literatures at St. John’s University, New York. A professional tango dancer, Ninah took my story with her to Buenos Aires for a conference on unspoken communication in Argentine tango. I was delighted to meet Ninah when she visited the UK with her husband Jonathan in the summer and was privileged to be able to contribute further to her exploration of non-verbal communication in tango and its therapeutic potential for people with Parkinson's ahead of her next conference address sometime this month. I'm hoping that Ninah will be able to be in Cambridge for the launch of The Tango Effect in the spring. And recently I was put in touch with Nathalie Rodriguez, based in Buenos Aires, about an exciting new project embracing Parkinson's and Argentine tango - watch this space!

So, a huge thank you to all for your patience and your continued support. Just to confirm that your copies of The Tango Effect, along with the rewards associated with your pledge level, are very definitely in the pipeline and I'm very much looking forward to sharing these with you. I'm hoping there will be a joint celebration of the book's publication and what feels like a rather momentous birthday, which falls on Easter Monday, 13th April. Tango has to be in there somehow too, of course, although not the big Bank Holiday event I'd envisaged. Ideas, anyone?