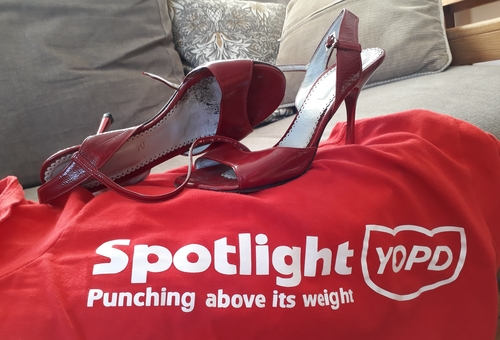 I first encountered Spotlight, the very excellent charity for people with Young Onset Parkinson's, at Rooney's Boxing Gym back in April. The first half of the slogan on the front of my t-shirt (the back pictured above) 'ON THE ROPES' sums up pretty neatly how I'm feeling just now. Months of dedicated slog on my part writing articles, blog posts, updates and emails, speaking to a range of audiences, doing interviews and making videos, and various fund-raising events - the quiz in May, the Grand Garden Spectactular Weekend in July - have been more than matched by fantastic and unstinting efforts from supporters. Together we have taken the campaign to an incredible 84% funded. I couldn't have done it without you. Now, though, almost out of ideas and energy, with funding apparently at a standstill - am I facing defeat?

Granted, there are still a couple ot things in the pipeline: the journal Advances in Clinicial Neuroscience and Rehabilitation (ACNR) which published my article 'Parkinson's & the Tango Effect' in their Online First Personal Perspective in March will also include it in their print edition due out shortly. I'm booked to speak at True Stories Told Live' in mid-September. A new anthology from Arts Emergency, I Wrote it Anyway, will feature my piece 'Writing (and Dancing) as a Response to Diagnosis: Fight or Flight?' And I am still working on the possiblity of a celebratory milonga for the autumn: watch this space.

Meanwhile a friend alerted me to this coming Tuesday's BBC Prom 70: TANGO PROM which promises "a celebration of the heady, sexually charged Latin American tango, from its origins in the bars of 1880s Buenos Aires, through to Ástor Piazzolla’s Nuevo Tango that emerged in the 1950s.The story also embraces the Finnish tango tradition of the early 20th century – steeped in the themes of love, sorrow and nature – and comes bang up to date with some of the latest tango music." The line-up includes Grammy Award-winning pianist Pablo Ziegler, Cambridge-based orchestra the Britten Sinfonia and Strictly dancers Vincent Simone and Flavia Cacace.

Too good an opportunity to miss? Worth even missing out on a chance to dance at our regular Tuesday evening milonga? I think so. Inspired by the second half of that Spotlight slogan '- BUT FIGHTING BACK' I've dugout my red tango shoes and Tuesday will see me en route to the Albert Hall. Yes I know there won't be room for me on stage. But I'm hoping that rubbing shoulders with the 5,000 or so who were fortunate enough to get hold of seats whilst they were still available and the 1350 who like me will be 'promenading' will help me bring the book to the attention of a new audience of tango fans. And who knows? Maybe I will even meet that elusive patron?

What's more likely is an exciting evening with one or two new contacts made but no magical fix. So to get me off those ropes and back in the ring with gloves at the ready, I need you to be there, all of you, in my corner, urging me on for the final round.

Go for it Kate! We will be thinking of you tomorrow evening at the proms, sending you a bit of extra "oomph" to promote your book and your cause.
Looking forward to your next update...

Well done Kate, we will be sending you energy from France for tomorrow night! David and Michèle Lambert