Radical solutions to defeat Pandemics, War, Famine and the Death of the planet 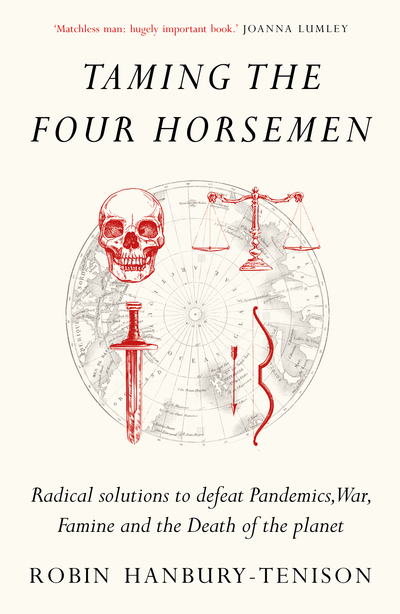 Environment
You made Taming The Four Horsemen a reality. It's available in all good book stores now.
$8
10 pledges

1st edition paperback, eBook edition and your name in the list of Super Patrons in the front of the book. EARLY BIRD price, only 20 available.
$30  + shipping
60 pledges

5x copies of the book, plus everything from Super Patron level and 5 names in the front of the book.
$375  + shipping
2 pledges

A private visit for 2 to the Eton College Natural History Museum (which holds Robin's personal artefact archive from his expeditions) + 2 books and tea with author in Eton. Travel not included. Only 3 available.
$450  + shipping
1 pledge

A special page of thanks at the front of the book. Plus everything from Super Patron level. Only one available.
$600  + shipping
2 pledges

Dinner With The Author

Dinner for 2 with the author at the Travellers Club + everything from Read With A Friend level. Travel not included. Only 2 available.
$750  + shipping

Two nights Bed & Breakfast for two and a dinner with Robin and Louella at their beautiful house on Bodmin Moor in Cornwall + everything from Read With a Friend. Travel not included. Only 2 available.
$1,125  + shipping
2 pledges

Lecture or Talk on Exploration

A talk by the author to a school, society or charity of your choice. Robin is a very experienced lecturer with a range of fascinating illustrated talks on exploration and his own many expeditions, including his 7 long rides with Louella. And, of course, there will be one on Taming the Four Horsemen. Includes 20 books.

I am an 83 year old explorer, who has travelled adventurously in rainforests and deserts all over the world, published well over twenty books on travel and exploration and campaigned assiduously for tribal people and their increasingly threatened environments, especially rainforests.

My theme is that all civilizations collapse after about five hundred years and this is usually due to the overuse and misuse of their land. All the indications are that we are doing it again, only this time on a global scale. I have seen the resulting poverty, conflict, starvation and destruction at first hand and, trusting in the wisdom old age brings, I am emboldened to hold forth on what we should do about it.

I begin with a lyrical description of the rainforest seen at dawn from the top of a ruined Maya temple. This leads me to wonder what went wrong with their world fifteen hundred years ago and whether it has any lessons to teach us. The Maya theme is maintained on and off throughout the book, as their story is fascinating and colourful.

This book is a powerful polemic on what I see as the major threats facing the world today and how they can be overcome. The Four Horsemen of the Apocalypse can be made to fit these threats fairly neatly and this gives a shape and continuity to the book.

The White Horse represents Pestilence and so Pandemics, which now seem inevitable. My solution is to devote the vast resources currently being wasted on space research to examine the potential of the minute but even more infinite world of microbes to cure sickness and revolutionise agriculture. My own personal experience of living with many remote tribal societies informs my conclusion that their lives are healthier than ours and that we are poisoning ourselves without understanding how.

The Red Horse stands for War, an inescapable part of the human condition and usually due to poverty and overpopulation. My solution is to promote prosperity and independence for all through providing free electricity everywhere by rejecting fossil fuels and concentrating on clean renewable energy from solar and wind and storage.

The Black Horse spells Famine. Here overpopulation and bad land management are to blame and a radical solution is needed. We have had the knowledge and technology since World War II to control the weather, but scientists have been afraid, with reason, to use them. The time has come for us to grasp the nettle. If we were able to make it rain, just a bit, in desert regions, we would immediately solve much global starvation.

The Pale Horse is Death. Here it is climate change that needs addressing. Geo-engineering will have to be adopted if things start to fall apart and we should start taking it seriously now. Meanwhile, there is so much we can do now by helping to undo the appalling pollution we are inflicting on the planet, especially the oceans.

We, the human race, are the brightest beings ever to have been created. We are infinitely inventive and creative. In spite of all our faults and frailties, I believe that we and our descendants deserve to live, but we must learn both to do so in harmony with all the rest of Nature while at the same time taking seriously our huge responsibility, as the only thinking beings, to make it work.