A light-hearted, informative guide to what screen-time, gaming and gadgets are doing to children, for parents who’d rather lock it all in a cupboard.

With your support, I've been hard at work on the book. It was submitted to the publisher a few months ago and now contains over 270 gaming suggestions and loads of tips to help you guide your children to healthy gaming.

It's been through its structural edit now, which means it's had a close read by a professional editor. I was excited (and a little nervous) that Unbound appointed an editor to this who was also a parent of a young child playing games. This has helped clarify the message of the book to make it clearer than ever.

Along with editorial feedback, she kindly shared thoughts on the book as a parent, which couldn't be better.

"I found this to be a really worthwhile read and one which helpfully challenged my (somewhat Luddite) perception and understanding of gaming. There’s a lot to take away, and already I have found myself trying to take a more level approach with my nine-year-old son, engaging with him by trying to discover more about what he plays and why. I may be some way off playing the games with him, but even the small amount I’ve managed to put into action has been a great start."

"I’m really impressed with this book: it’s thoughtful and informative, and has the potential to be enormously useful to the masses of parents out there who both despair of their children’s gaming habits but also haven’t a clue what it’s all about. I would place myself quite far along the scale of ignorance and denial, and in all honesty you have opened my mind both to the potential of gaming (taken in the context of being a new form of media) and also the opportunities to interact and communicate with a child (in my case, a son) who regularly operates in this world."

I've also started work on some of the online resources that will support the book, including a database of games that you will get early access to as a supporter. Next up is the full copy edit, designing the cover and starting to layout each of the pages.

Thank you again for all your support, whether you are an individual, a family, a community or school group, charity, developer or non-profit. It's amazing to be able to make Taming Gaming into something all the more special with your enthusiasm (and pre-order). 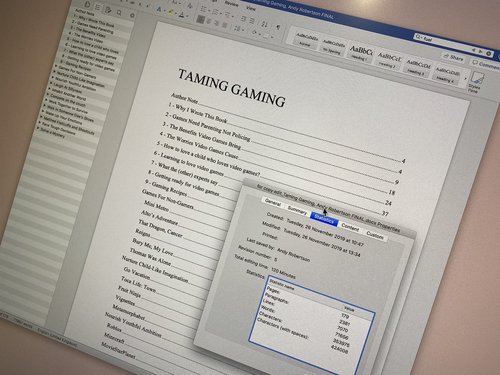 A copy of the hardback plus the ebook. Special Early Bird offer for the first 100 pledgers.