THE WILD HUNT for backers

As you can see from the video above (with the whole manuscript formatted into an impossible font, after we realised we could give away most of the book doing this!), we've reached a crucial stage for TALES OF BRITAIN – all 77 stories are now complete, sequenced into order in a single manuscript, and practically ready for the clever folk at Unbound to start editing and designing into a beautiful roadmap of tales for you to lose yourselves in...

Or at least, they could, if we had another 70% – about 400 people – added to our list of backers. In truth, progress has become its slowest since we launched, dozens of new followers on Twitter (thanks to the kindness of unofficial Blackadder account @pitchblacksteed, as The True History of the Black Adder was a previous project, and of course Sir Tony Robinson is one of our patrons), but translating that exciting boost into actually visiting THIS site, and supporting the project with actual pledges, is proving... tough.

But just £10 for an eBook means you are supporting the British Story Treasury for a whole new generation, for your name in a book which will still be entertaining people long after we're all dead. What value do you put on our ancient national heritage of storytelling? To get a glorious first edition, with your name alongside Cerys Matthews, Tony Robinson, Neil Innes, and many more, is well worth an early show of support, so please join us today!

Well, it does at least give us a beautifully weak link to the topic of this Folklore Thursday's theme – THE WILD HUNT (for backers). 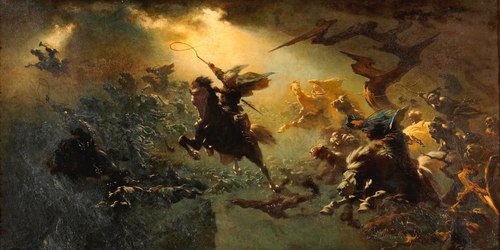 We remember stories of The Wild Hunt from when we were tiny – they tended to centre on Edric the Wild, being from the Welsh border, which was Edric country. The ghostly hunting party, led inevitably by big black ghost hounds with eyes like saucers, has boasted some of the greatest names from folklore, like a kind of prehistoric Avengers: Edric, Hereward the Wake, Satan, Odin, Thor, King Arthur, Gwyn Ap Nudd, Nuada, Herne the Hunter – perhaps even Elvis. Few have seen them and lived to give a full roll-call.

Now, Norse folklorists out there will already be grinding their teeth, insisting that The Wild Hunt is their territory, the personal project of Odin – but it's one of many Norse myths which has translated comfortably to Britain, and developed over time, and our version centres on the drunken clergyman Dando, of St. Germans, Cornwall, and his own inveiglement into the hunt. The anti-hunting message just seemed entirely built in to the myth, and so we went for it. 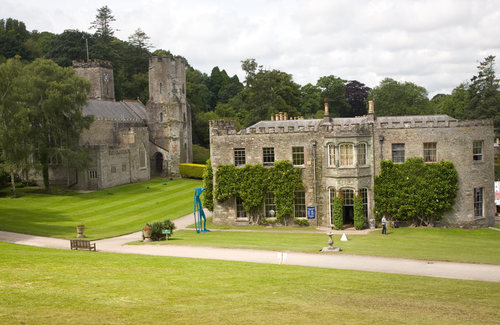 Was this where Dando lived? Legend tells us so, but The Wild Hunt, at the moment at least, is scheduled to be the final, haunting tale of the 77 on our roadmap. As explained on Twitter, we're against sequencing these tales regionally – TOB just becomes an anthology of regional stories that way, and we're all about mixing it all up, borders be blowed. But there is a clear historical thread from the arrival of Brutus in Albion, to narratives set positively within living memory, and that seems by far the most logical way to order these 77 tales. obviously they are designed to be enjoyed separately, a random lucky dip, but they do in their own way retell Britain's history, millennium after millennium, and the way the nation was built by successive waves of immigrants, and so ordered in this way, a story arc is irresistible.

Dando seems to have been a medieval priest, but there's something eternal about The Wild Hunt's punishment for all its doomed members, which makes this tale a suitably timeless sign-off for our book.

We get shivers of pleasure to see these lovingly retold tales flow from one to another, over nearly 200 pages. We want to share this book, and the location tourist guides, with you all, with the world. But like the members of the Wild Hunt, we cannot escape our fate: to try and get this crowdfunding up to 100% – or at least 90-ish% – and then, the book becomes a reality. If you can think of any way of helping us reach our goals, please, please get in touch, and keep spreading the word however you can. 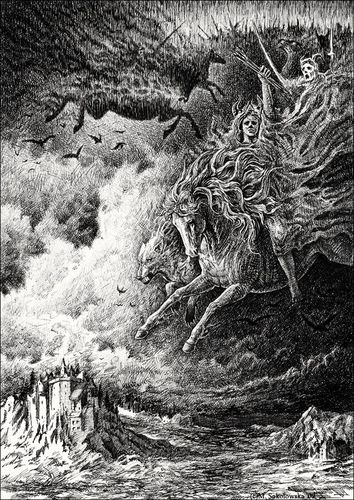