A flighty Folklore Thursday to you, dear readers! And happy Summer – you'll have noticed our blog is all updated, and blow us, what a lot of them there are: more than two years' worth!

The theme of skies and stars threw us at first this week – because Tales of Britain is certainly a thoroughly land-based anthology. We thought, well, The Great Gormula zips around on her broonstick, that's one option… but really, when it comes to Sky folklore, we have one major contender, the tale which actually brings our 77 stories to a close – THE WILD HUNT! 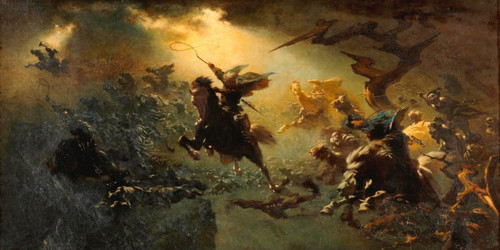 In fact, at first we were quite reluctant to include any story about the deathly Wild Hunt streaking across the skies, because it was so untethered to any geographical location, being a North European tradition which stretches from Germany to Ireland and back. Nonetheless, it was one of the first folktales which I remember being gripped by as a child, as one of the key leaders of the hunt was always said to be Eadric the Wild, a Saxon who had a few bones to pick with William the Bastard when he came, saw and Conquered – and being native Salopian, he was one of the few Shropshire figures we had to celebrate!

But then we found the celebrated folktale of the dipsomaniac clergyman Dando of St Germans in Cornwall, and although Kernow was already one of the most tale-populated areas on our map, we had our excuse to include a Wild Hunt story. 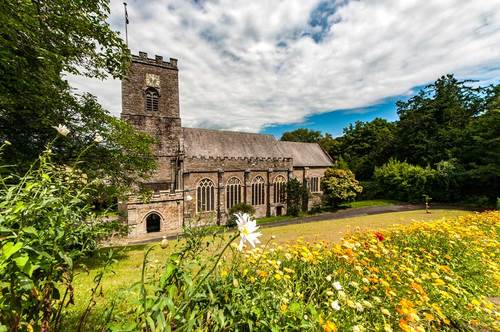 The other reason we included the tale, and particularly at the very end (admittedly ruining our scheme of ordering the tales in vaguely historical order – the Dando legend is certainly Medieval), is that it gave us the chance to give a final bow to some of our greatest characters in the previous 76 stories – because, of course, the ghoulish horses and hounds which are fated to hunt across the skies of Western Europe forever more include a whole host of famous names serving an eternal penance for this, that or the other, many of them already in our book – King Arthur of course, poor old Herne the Hunter, Dorset magician Conjuring Minterne, Welsh despot Tegid Foel and many more.

Speaking of Wales, we've announced a Welsh date for our 2019 tour! Come to Cardiff City Centre on the second Saturday in August, where you'll find us doing open-air tales at the stall of kind Candy Jar books, who missed out on publishing this first edition of Tales of Britain – but watch this space! And don't forget, we'll be by the Scott Monument in Edinburgh at 5pm (just after Stephen Fry's finished his Greek Myths show) on Sunday 25th!

Do come along and enjoy some stories from all over the British Isles – maybe including a certain spectral hunting party. Keep watching the skies… 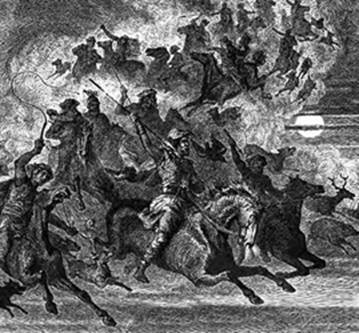