The Rose & The Root: Tam-Lin & The YA Conundrum

A glorious Gardening-themed Folklore Thursday to you, green-fingered folkies!

Although it's snowing so heavily our World Book Day event at Frome College and the Merlin Theatre has been cancelled, and it's St David's Day, so a tale about Scottish summer flowers could not be less apposite. Nonetheless, NOW READ ON...

Our copy-edited manuscript of 77 tales with tourist guides was just being tweaked, reworked and perfected, and we were up to Number 17 when we noticed the theme the sage gods of Folklore Thursday had chosen – and 'Tamlane of Carterhaugh Wood', also known as 'Tam-Lin', certainly fitted the bill for this week's investigation. 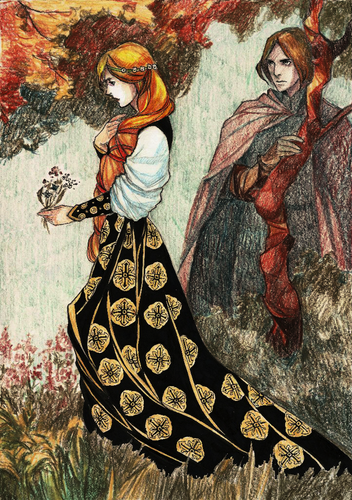 The story is one of the more continually manifest in our culture out of the 77 – its unique flavour of romantic mysticism has ensured the plot has been recycled many times, from the brilliant Benjamin Zephaniah update linked above, to the really quite dodgy 1970 scare-free horror film 'Tam-Lin', starring a very young Ian Lovejoy.

In short, our protagonist Janet is gifted with land by her father, which includes Carterhaugh Wood, which can still be found just north of the Scottish border, in Selkirk. But while exploring her new property, Janet spots a red rose tree, with a white horse tethered to it, and finding it impossible to resist the roses, she is accosted by Tamlane, a handsome once-human faerie prisoner, and they fall in love. Soon Janet discovers that she is pregnant and has to dig up a root of the rose tree and eat it to get rid of the...

This is the point we had reached when we learned of the Gardening theme, and also the point where the copy-editor had written something along the lines of 'There is no way this book can be published for children.' To which our reply has to be, 'Fair enough, but that's why we're publishing this with Unbound, rather than a machine-like pedantically age-targeted children's publisher.' TALES OF BRITAIN is intended for the Mythology shelves, the Travel shelves, the British Culture shelves, and we aim from start to finish to entertain the widest audience possible, as much of the family as we can, but you can't cater for everyone with 77 stories of such breadth and wild stylings.

There are few tales as problematic as Tamlane's. Janet is a wonderful hero, not stereotypically 'feisty', but strong and pragmatic – there's no question of her being presented as in any way not in command of her own fate, but she falls in love and deals with the consequences herself. If anything, the myth has always been a welcome gender subversion of the clichéd knight errand story, so in this case, it's the young woman who saves the beautiful man from the forces of darkness. But then, the plot does rely on the two of them going from 0-300mph in no time at al, romantically and sexually, and that's not an easy thing to present before a modern audience – how do magic forests affect the question of consent? And we didn't want to cutely euphemise what happens between them, she gets pregnant, so although of course our retelling does not turn into an erotic epic (there are plenty of those out there), there's no patronising attempt to cover up sexuality here – just as there isn't in our version of The Canterbury Tales' Miller's Tale. We know it's more likely to prick the ire of 'moral guardians' than the oceans of blood-spillage in so many other stories, but that sex gets more complaints than violence is only one instance of the madness of 'moral guardians'.

The tale does of course get even trickier, it's true – when Tamlane learns why Janet wants to eat the root, and instead convinces her to break his spell, and be with him. How to present his desire to raise the child without it seeming controlling, gaslighting or worst of all, to be making any kind of 'pro-life' statement? Janet has no doubt that she has every right to eat the root, without shame. But... love rears its head, and she decides to fight for it.

There's nothing in this story that you won't find in yer average Young Adult novel – teenage pregnancy is hardly shocking to anyone of any age today. We believe we've approached the problems the tale throws up with the utmost taste and careful wording, to try and tell the story as true to its source and clearly as possible, while making the characters relatable to a 21st century audience, respecting your intelligence but also enjoyably communicating the romance and magic of the legend. The only one who has to come out of it badly is the Queen of the Faeries, but she was planning to kill Tamlane, so she deserves her defeat at the end. 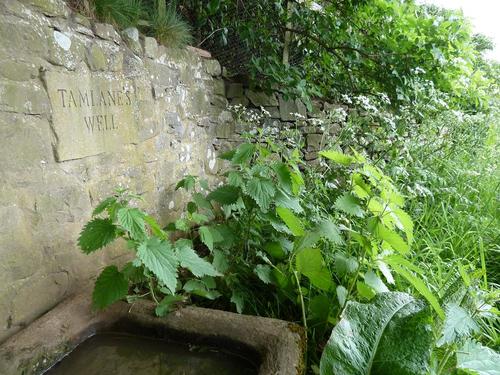 And so, let there be no doubt, the vast majority of these 77 tales are as fun for tiny tots as they are for centenarians and everyone in between – we want little kids to be able to pick the book up and enjoy their favourite stories (after all, we certainly read a lot of stuff not aimed at our age group when we were little readers), but TALES OF BRITAIN is not aimed at 'the children's market'. Because if targeting little readers means leaving out a part of our folklore as crucial and eternally bewitching as the story of Tamlane and Janet, there's simply no point. Not least as it provides us with one of the most evocative touristy days out, with Tamlane's Well a real destination in the Scottish border country, in many ways as lush and enticing now as it was when Janet first went exploring.

Please pre-order your copy of this roadmap of British folklore today, is you haven't – or tell a friend if you already have! The stronger our campaign, the more beautifully our book will bloom this summer. And our campaign is always growing...!

Happy St David's Day – there'll be more to come today on that score! 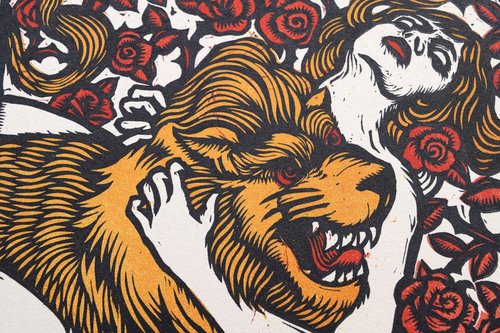 Thank you for such wonderful updates. They always make me smile when they drop in my emails!