It has gone all-too silent, deep, crisp and peaceful since our BIG ANNOUNCEMENT last week, and if you're disappointed that the promised switch hasn't yet occured, we can only offer you solidarity! No word has come through about what our situation is, but hopefully we won't all be left hanging over the festive season. As it is, we have been promising you a special seasonal surprise for weeks, and having to announce the exciting new deal in advance did feel like being hired to play Father Christmas, but then being told you have to open all the kiddies' presents in front of them first, in case any of them didn't like what was inside. Still, getting this book in our mitts remains the be-all and the end-all, as we all know there really isn't anything remotely like this out there, and it won't hit the (indie) shops before time. So it'll be a story packed 2018!

AND WE STILL HAVE OUR LAST SHOW OF THE YEAR TO LOOK FORWARD TO THIS SATURDAY AT 3PM! 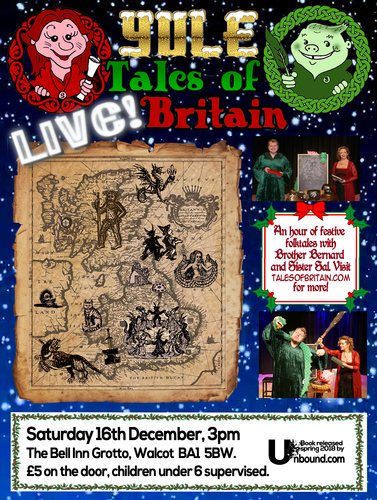 And besides... we do have one very special present for you all, unwrapped until today, ready to share with you: a free ancient British story, retold specially for the season, and not in the book itself: THE LAST YULE. Click for PDF!

Nothing whatever to do with Wham, this yarn sees us breaking one of our key rules – to avoid stories involving saints, whose questionable miracles clog up our national treasury in many cases. But we've made an exception for St. Augustine, the very first Archbishop of Canterbury.

This saxon squib actually came to us via the star of Tales of Britain's sister book, SOUPY TWISTS – Stephen Fry hilariously summarised the exchange at the Yule feast in his priceless compendium of essays Paperweight 25 years ago, and not only was this the first version of the story we found... it's actually turned out to be the only other version, search as we might. Was it a piece of East England lore which was picked up by young Fry, but never popularly known, or perhaps even his own invention? We hope not the latter, though at least this story is FREE, so the dear fellow needn't worry that this is plagiarism for commercial reasons. But in the belief that it is a genuine nugget of history which has come down to us via Stephen's very brief summary, this little tale has everything – a mad Pope, saxon yuletide self-indulgence, and of course, acres of snow, both up in Ramsgate, where Augustine first set foot on British soil, and down at his eventual home in Canterbury. 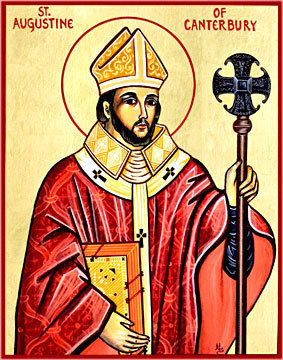 To everyone out there of Christian faith, we sincerely hope you enjoy the story in the festive spirit in which it's intended – Christianity has, after all, been holding the reins of our winter festival ever since Augustone came along, so after over a millennium, you can't complain when the blueprints of the festival continue to become more and more apparent, that this time of peace, pleasure and warmth in the depth of the coldest season is something we have been celebrating for a lot longer than Christianity has existed – and we will be making good use of December the 25th as an inspiration for hedonism and jollity for as long as Britain exists. No offence is intended, especially at this time of year, and we hope it raises a chuckle!

It seems odd that there will be no official Folklore Thursday next week, but we will be keeping you updated no matter what the season, and will offer something new before Mithras/Saturnalia/Xmas/Christmas itself. Whatever you're celebrating in the meantime, have a very happy one!

Oh, and remember, this year's must-have Christmas present is the promise a few months' hence of a road atlas of British folklore retold for the 21st century complete with with tourist guides! Just because the book is all-but funded, doesn't mean we don't want the total to keep rising, so if you love your family, think of their reading pleasure, keep pledging and buying copies! 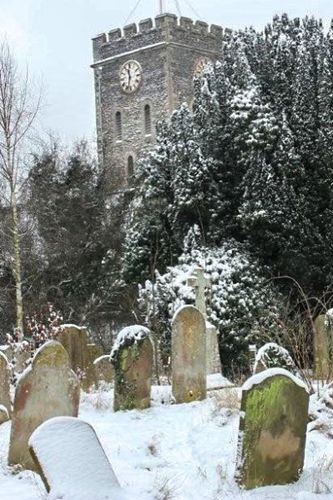